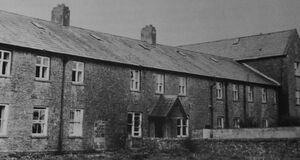 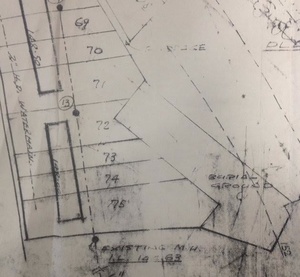 The publication this morning of a report into burial arrangements at Mother and baby homes was compiled by a commission of investigation formed after historian Catherine Corless’ revelations at the site of the former Mother and baby Home in Tuam (above).

This structure had at some point been deliberately filled with a large deposit of stones, almost to the upper edges…

The second structure discovered proved to be of greater significance. It is a long structure built within the boundaries of the old sewage tank.

It is divided into 20 chambers. Initially, a structure with two lids was discovered. One of the lids was completely intact and the other was partly broken.

These lids were carefully removed and were found to have covered a chamber with a small division between two sections of the chamber.

Samples of the remains were retrieved from within the chambers using customised telescopic equipment from the surface openings.

The Commission did not consider physically entering the individual chambers because the size of the surface access points was very confined, there was a danger that any attempt at physical entry would have compromised the many skeletal remains and entry was, in any event, not considered to be safe.

An archaeologist on the team appointed by the Commission considers that the logical intended use of the first structure discovered (described in the reports as “cesspool” or “sewage tank”) was to receive sewage from the culverts and pipes found coming from the direction of the former Home.

…Without a full excavation it is not possible to conclusively say what was the exact engineering purpose of the structures but the Commission considers that it is very likely that it was sewerage related. This view is corroborated by some of the scientific testing carried out at the request of the Commission and described below.

‘The Commission has established that a total of 973 children from the Children’s Home died either in Glenamaddy [nearby workhouse] in the Tuam Home itself or in a hospital or institution soon after they were transferred there from Tuam.

Of these, 79 children died in Glenamaddy. The Glenamaddy workhouse had its own burial ground so it is likely that the children who died there are buried in that burial ground. However, there is no burial register available for the period in question so this cannot be verified.

The vast majority, 802, died in the Tuam Home itself.

The details of the deaths of the children were established by the Commission from the records compiled in the Home and from a list provided by the General Register Office (GRO) and already in the public domain.

When analysing the records, the Commission noted that a significant number of children who were resident in the Tuam Children’s Home were transferred to the Central Hospital, Galway when they became seriously ill.

The Commission checked the Register of Deaths and found that 86 children who had been transferred there died soon after the transfer.

Six other children died soon after leaving the Tuam Home: two children died in the County Home, Castlebar; one died in Crumlin Children’s Hospital; one in St Bridgid’s Industrial School for Girls, Loughrea; one in Clifden District Hospital and one died at home.

The old Galway workhouse became the Galway Central Hospital in the period 1922 – 1924. It was subsequently rebuilt and renamed the Regional Hospital. It is now the Galway University Hospital.

The Commission has found burial records for 50 of the children who died in the Central Hospital, Galway – they are recorded as being buried in Bohermore Cemetery.

Twelve mothers who were resident in the Tuam Home died, the majority from complications of childbirth; some died in the Home itself and some in the Central Hospital, Galway. It is not known who took responsibility for the burial of these mothers.

If the Central Hospital took responsibility for the burials it would be expected that they would be recorded in Bohermore cemetery but the Commission did not find any record of these burials there.’

Earlier: Mother And Baby And Burials

55 thoughts on “Death In Tuam”