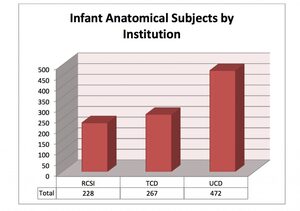 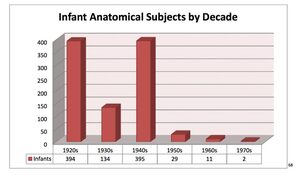 The publication this morning of a report into burial arrangements at Mother and Baby Homes includes a chapter on the transfer of the remains of children and adults who died at the institutions to medical schools for “anatomical study”.

The report explains that it was legal, under the Anatomy Act 1832, for unclaimed remains to be used in this way, at this time.

“The burials of the anatomical subjects used by the Dublin Medical Schools are properly recorded in Glasnevin Cemetery.

“It has not been possible to establish anything about the burials of the child anatomical subjects used in the Galway Medical School as their names are not known.”

Between January 1920 and October 1977, the bodies of more than 950 children who died in the Dublin Union, and associated institutions, including Pellestown, were sent to medical schools in UCD, Trinity College Dublin and the Royal College of Surgeons in Ireland.

All but 18 of the 950-plus children were “illegitimate” children and aged between 10 minutes and 15 years at the time of their death, while 27 additional stillborn infants were also sent to the Dublin Medical Schools.

“Not all deserted or abandoned children who died in Dublin Union institutions were sent for anatomical studies. There is no information available about the criteria (if any) used to choose which children’s bodies were sent.”

The remains of the children examined in the Dublin schools were later buried in the Poor Ground section of Glasnevin Cemetery.

“They were buried in individual burial plots that were located next to those used for ordinary child and adult burials. The usual practice in Glasnevin Cemetery was for the remains of a number of anatomical subjects to be collectively buried in the same plot on the same day.”

“It is unknown if the remains of individual bodies used for anatomical studies were placed in separate coffins for burial in Glasnevin. A meeting of the Dublin Board of Guardians in 1907 heard accusations that in the medical schools, coffins were not being used for one body alone, but that the practice was simply to fill up a coffin with various body parts from various individuals who had been dissected.”

The commission’s report states that, under the Dublin Cemeteries Act 1964 and bye-laws under that act, if the remains of more than one person were to be put in a coffin, an application had to be made.

The Glasnevin Trust told the commission: “There are no annotations within the burial registers showing that permission was granted…to allow more than one set of remains per coffin.”

However the commission later notes:

“The Glasnevin Trust told the Commission that, while each burial was required to be witnessed by a designated member of staff, the staff did not inspect coffins internally.”

The register contains no mention of any children’s remains of having been transferred but the commission states: “evidence exists that children’s bodies were sent to the medical school”.

Of the evidence that shows children’s remains were sent, the commission found:

“In every instance, the body or bodies were supplied by a porter at the Central Hospital/Regional Hospital Galway. In every instance the infant remains were received by the head of the School of Medicine and Anatomy Department, University College Galway.

He paid the porter 10/- for every infant body received. It appears that between April 1949 and November 1964, he received and paid for 35 infant anatomical subjects. None of these infants is recorded in the Galway Anatomical Register.

Unfortunately, no records survive which name the children whose bodies were sold. It is
possible that some of the bodies were stillbirths which, at the time, could not have been registered.”

The report explains that, under the Anatomy Act 1832, a person with “lawful possession” of a dead person could allow for an anatomical examination to take place – unless the person had expressly stated, while alive, that they did not wish this to happen.

This had to be expressed in writing or orally in the presence of at least two witnesses, and bodies could not be sent to schools until at least 48 hours after death.

“In the case of deserted or abandoned children who died in these institutions, there was no one with the legal capacity to object to the bodies being sent for anatomical studies.

“The bodies of “illegitimate” children that were unclaimed by the mother or any other relative, could similarly be used for anatomical studies.

“It is not known, but it seems unlikely, that the mothers concerned were made aware of the existence or requirements of the Anatomy Act at any stage during their stay in any of the institutions being investigated.”

Under the act, the medical schools were legally obliged to ensure that the remains of people used in these studies were “decently interred in consecrated ground” and that a certificate of interment be given to the inspector of the district within six weeks of receiving the remains.

The schools were also legally obliged to maintain registers of bodies received.

However, the commission found that the 48-hour rule and six-week limit “were not implemented in practice”.

“The Commission has since established that a number of children were transferred for anatomical studies from Dublin Union institutions before the 48 hour period for claiming the body was over. In general, burial took place two to three years after the death.”

The commission also recalls a letter written by the Chief Medical Office of Galway County [not named] to the Department of Health in January 1961, complaining about the size and cost of burial spaces for the remains of those whose bodies were studied.

“A problem has arisen regarding the interment of such remains of bodies following their use for anatomical dissection.

“According to the Rules applicable to burial grounds for every person over 12 years of
age a burial space of 9ft. x 4 ft. must be provided.

“This would mean that if the remnants of ten cadavers were to be interred, ten graves should be provided, ten graves which would prove very costly and indeed wasteful of graveyard space.

“The remains of a cadaver after dissection consists of dismembered bones, perhaps some
entrails and muscles which could be easily accommodated in a coffin 3’ x 12” x 9”, and if placed vertically in the grave four such coffins could be accommodated in the space above prescribed.

“Markers, of course, would be placed over each coffin.

“There would be no intermixing of corpses. I understand that this procedure is adopted for other anatomical schools. I request a direction if the procedure suggested above would be allowed and approved of by your Department.”

The suggestion was rejected, the commission found.

“…a civil servant’s note on the file states that ‘… it might be said that these rules are not always (or even usually) strictly observed throughout the country’.”

Earlier: Bessborough: ‘There Are 900 Bodies After Going Missing’ 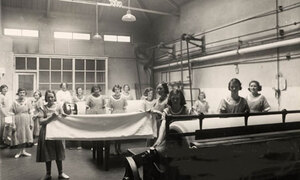 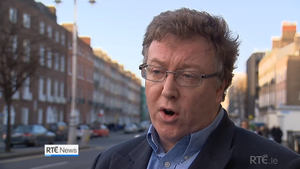 The Sin Of Omission