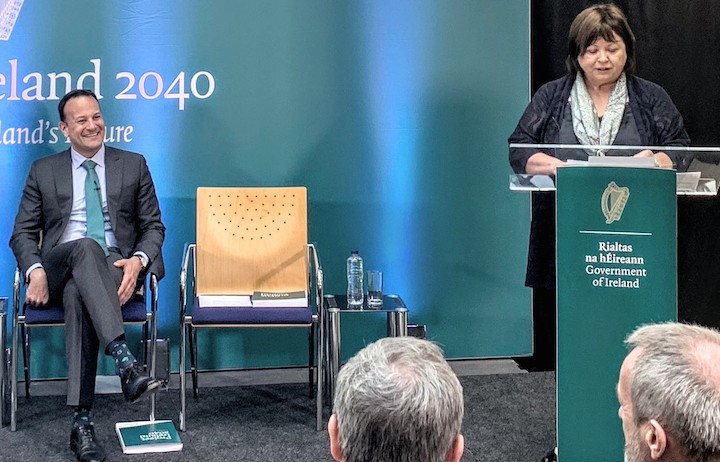 Imagine you are a woman diagnosed with cervical cancer and you stumble across this photo (above) taken a few days ago.

Or you are the husband or son or daughter or mother or father or brother or sister or friend of a woman who just died from that same preventable cancer.

Imagine our ex-Health Minister/current Leader grinning in joy at the jaunty speech being made by the funny woman at the podium.

This is the same leader who is forcing women terminally ill from cervical cancer to go to court to fight for basic dignity as they and their families prepare for death.

Imagine the stand-up at the podium is our ex-Tanasite/current Board Member of multiple Pharmaceutical Companies.

Along with her massive monthly state pension, she is also the woman who, despite countless warnings of fatal dangers, aggressively privatised-for-profit those same cervical smear tests.

Instead, they’ve just appeared on stage together where he rocked in his seat in spasmodic glee as she killed her stand-up debut with a sizzling set about his infamous socks.

Imagine living in a democracy where the murderous decisions of a comedy duo of laughing psychopaths aren’t just protected, they are celebrated.

This is not our Ireland.

11 thoughts on “Impossible To Comprehend”