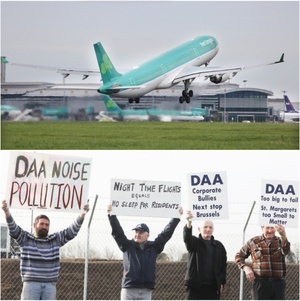 “It is at EU level that this change [to introduce WHO guidelines for noise] must be made to ensure a consistent approach to mitigating noise across member states. It would be inappropriate for Ireland to second-guess this work and pre-empt any decision at European level.”

Ms Daly’s amendments were reversed in the Seanad before the Easter break.

A spokesperson for the Department of Communications, Climate Action and the Environment, officially in charge of implementing the WHO guidelines, said:

“The recent WHO recommendations on noise levels are not directly applicable in Ireland.”

A spokesperson for the Environmental Protection Agency cautioned that these values from the WHO guidelines for airports “will be a very significant challenge for all the member states”.

The challenge lies in implementing noise reduction strategies that are affordable.

This is an issue that councillor Roderic O Gorman has been tackling for his constituents living beside the M50. “There’s not enough money available to put into mitigation measures,” he says.

Transport Infrastructure Ireland, the body that would be in charge of installing noise mitigation walls, can’t be compelled by Fingal County Council to build them.

Even though O Gorman says engagement with the TII has been “more positive in the past year” he doesn’t expect a walling system to be installed any time soon.

“The barriers would have to be really big,” he says. “The most immediate win will be to ensure the next time roads are resurfaced they will be covered in a rubberised material which will help absorb some of the noise.”

Residents of Laurel Lodge, near the M50, are eyeing solutions from other European cities. “They are looking at building a tunnel over the road to eliminate the noise and to create amenities for pitches and gardens. It’s an ambitious project,” adds O Gorman.

The Dublin Airport Authority (DAA) broke ground on building its second runway in February of this year on the back of planning permission it secured a decade ago from An Bord Pleanála (ABP).

The planning appeals board at the time had rejected its inspector’s recommendation that planning permission not be granted on health grounds.

It is not uncommon for ABP to reject its inspector’s report findings, however the board did impose a number of conditions – some of which the DAA is still contesting.

The most contentious one is the restriction on the number of aircraft movements at night (11pm to 7am) to just 65 based on the scientific evidence of the health impact noise has, now further substantiated by the 2018 WHO guidelines.

The WHO guidelines indicate that the only recognised mitigation measure for sleep disturbance is to rearrange flight paths or close runways for night time operations. The DAA says that with the one runway they are currently operating around 100 night-time flights.

“Sleep disturbance is the most well documented health effect and the direct link between exposure to noise and adverse health effects is clear,” says UCD’s Owen Douglas.

Other planning conditions included an insulation scheme and a buyout offer for nearby residents. The noise contour map the DAA is using to determine whether or not someone is eligible is 63dB*, a benchmark commonly used by airports worldwide.

However it’s impossible to prevent noise from getting into a garden that’s subject to aircraft noise, says acoustic engineer Karl Searson. He says that with roads there is the option of using walling systems, but aircraft noise will make its way into a garden or patio area.

Technically you can insulate a house to seal it off in its entirety, but if you open the windows noise will still get in.

“Based on the body of research to date regarding the health effects of noise, technically no one should be living near an airport if the recommended WHO noise limits are regularly exceeded,” says UCD’s Owen Douglas.

Sheelagh Morris is a resident of St Margaret’s, the village closest to the second runway that’s under construction. She says that she has to close her windows at night to get some rest:

“In the summer it’s especially difficult to put up with the humidity. I feel like a prisoner in my own house.”

Even though it’s impossible to protect residents from noise if their windows are left open, the DAA is insulating more than three times the number of houses it was asked to under the second runway planning conditions (over 200 houses).

As a result 38 dwellings are eligible for the buyout. According to Fingal’s Noise Action Plan there are 600 dwellings currently affected by average noise levels of 60dB or more.

A spokesperson for the DAA says the insulation scheme, entirely free of charge to the residents that are within their 63db contour map, aims to reduce noise levels between 5dB and 10dB.

The insulation scheme does not target a final decibel range – to ensure a good’s night sleep with windows closed the aim should be to hit 40dB as strongly recommended by the 2018 WHO guidelines.

“Especially now that I’m getting older sleep is becoming a real problem,” says Sheelagh Morris. “Planes will wake me up in the middle of the night. Then at 6am it’s one aircraft after another. It messes with your head.”

Astrid Madsen s a freelance journalist with over 10 years’ experience reporting on the construction industry in Ireland.

*Part of the complexity of dealing with noise is the data; unless otherwise noted in the article the decibel unit is Lden referring to a commonly used decibel average for day, evening and night. In the case of the DAA’s noise map to determine eligibility for the insulation measures and the buy out they are using a slightly different parameter LAeq, 16-hour noise contour, instead of Lden.