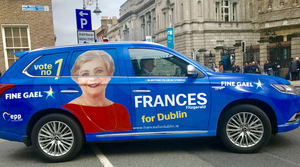 With the local and European elections upon us the same worn-out cliches have reappeared. Our various candidates will make a change, be the change, or simply remind us that they know we want change.

Every candidate promises a commitment to job creation. They’ll simultaneously create them, protect them, and bring them in the form of industry. It is, to put it mildly, tedious.

Voting in the current system we live under is seen as a pressure valve. It’s there to relieve the political pressure that builds up over time and release it safely in the form of anodyne candidates who can be coopted by the system if they’re not already part of the system.

But candidates like Frances Fitzgerald are far from anodyne. Her porous memory is a wonder to behold. Even more so the fact that she was “vindicated” by Justice Charleton without actually being so.

The magical wonderland that is Irish political culture means that Leo Varadkar was going to ensure she was appropriately compensated for having her name brought into disrepute by something as tricky as the facts.

Then we have candidates openly mocking trans people. Others calling for the deportation of those they consider “freeloaders”. There are some who rail against the apparently communist government we live under.

We have a candidate in Roscommon who said he didn’t want “Ali Baba” coming into his community. And let’s not forget the assorted mix who combine anti-choice, ultra-conservative Catholicism with a misunderstanding of Catholic doctrine that makes the Life of Brian seem like a canonical text by comparison.

Essentially, what they want is to regress Ireland to a pale church-fearing country where difference is to be destroyed in the name of their version of cohesion and culture.

Somewhere in between is the Social Democrats, ie., Labour without the charm or the intelligence. Their policy of creating an environmentally sustainable society goes hand in hand with their support of “international businesses in creating good jobs”.

The inherent contradiction of the above goes unmentioned. It’s all perfectly grand in the finest Irish sense of the word.

At least Labour pretended to represent the working class. This meant that it realised it had completely abandoned its base in the pursuit of power. In response it decided upon a tactic that it’s best try to keep up appearances.

A tactic that involved congratulating itself publicly for defending the common person while allowing these same people to feel the full brunt of its economic and social policies.

In the morass there are decent people who want to make a change in the way that they know or feel is best. For them, that means getting elected. And a lot of us will be in a position where we will vote for them if their policies aren’t stupid, racist, or both.

Because given the prevailing situation the best that many of us can do right now is vote tactically. Keeping out the old guard and the hatemongers is of such urgent necessity that it is difficult to put into words.

Suffice to say that voting to keep them out is one method of undermining them and ensuring their demise in the long term. This is far from ideal but it’s all that most people are willing to risk.

Hopefully out of this something positive will emerge. The problem is that the political system is set up to divert people and ideas. People can work as much as they want to try and advocate for legitimately good and decent ideas, such as a pushing for a carbon neutral society.

Right now that means a lack of any kind of tangible action when it comes to housing and homelessness. A profit has to be made somewhere after all, and if families have to be made homeless to do so then so be it.

Sinn Féin’s bill, which would have made housing a constitutional right was duly voted down. Who needs housing anyway? For too long we put all our hopes in elected representatives being able to gain a few crumbs from the wider political table for us The results have obviously been pitiful.

Political representatives are supposed to fit in and play the game as it has been played for decades. Don’t cause a fuss and you’ll have some success. Dare to raise your voice and you had better watch out.

The best I am hoping for is that the far right gets a trouncing. Beyond this immediate concern there is no hope to be had in voting for candidates who are limited by the system as to what they can achieve.

Greater protections for workers’ rights, the creation of an environmentally sustainable society, and the ending of all forms of capitalism are never going to be within the purview of a somebody running for office. These things can only be achieved by concerted mass action on the part of the wider population.

Our duly elected leaders are currently sitting by as the planet burns and corporations rake in massive profits on the backs of their broken workers. When they ignore something as basic as housing then how can they be trusted to deal with something like climate change? They can’t and they won’t.

So go out and vote in the elections. But go and do so with the realisation that its effectiveness is limited by design. Putting a roadblock in the way of the far-right should be the main goal. Any positive result beyond that is a bonus.

Maybe I’m wrong though and it’s just my own bias. Maybe there are candidates who will be able to change the structure from the inside for the better. I hope I’m wrong. And I hope they can prove me wrong.

Bryan Wall: Off With His Health