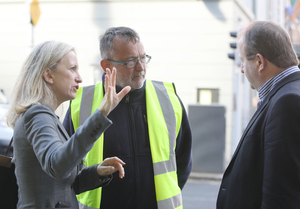 When Gemma O’Doherty announced her plan to seek a nomination for the presidential elections here, a collective guffaw emerged from certain quarters of Irish society.

Ms O’Doherty has made a name for herself, and powerful enemies, over the years by pursuing the truth no matter the cost.

When she confronted the issue of corruption in the Gardaí, specifically the issue of penalty points being wiped from the driving licences of high ranking members of the Gardaí, politicians, and even fellow journalists, her career with the Irish Independent was summarily ended by her superiors.

Having discovered that the then Garda Commissioner, Martin Callinan, had penalty points wiped from his own licence, she, as any decent journalist knows to do, made sure to check the information that she had was correct.

This involved verifying the address she was given. She duly called to the address, knocked at the door and asked the woman who answered if this was the address of Callinan. When the woman, Callinan’s wife answered yes, Ms O’Doherty left.

Following this she was reprimanded by her superior at the paper, Ian Mallon, who told her that “the Commissioner was furious and had made a complaint of harassment” against her.

Mr Mallon was the deputy of the then editor-in-chief, Stephen Rae, who had recently been given the position after Independent News & Media’s (INM) acquisition of the paper.

Mr Rae had previously been the editor of Garda Review, the monthly publication of the Garda Representative Association (GRA).

As Ms O’Doherty herself would later relate, after she verified Callinan’s address and published her story regarding his penalty points being wiped, Mr Rae “had been ordered down to Garda HQ”.

It would later emerge that Mr Rae himself also had penalty points wiped from his licence.

Not long after the publication of her story regarding Mr Callinan, and having turned down a “request” to stop working on Garda corruption, she was made “compulsorily redundant”.

Ms O’Doherty sued INM, which owns the Irish Independent and whose largest shareholder is Denis O’Brien. She settled out of court, with INM paying her an “undisclosed sum” and covering her legal costs.

INM also issued a statement, in which they “acknowledge[d] the exceptional work of multi-award winning investigative journalist Gemma O’Doherty for the Irish Independent during the course of a lengthy career.”

Her career with the Irish Independent over, she nonetheless continues to comment on and investigate instances of corruption in Irish society, most particularly surrounding the Gardaí and their involvement in the case of the disappearance of Mary Boyle.

She has also been an ardent supporter of the whistleblowers Maurice McCabe and John Wilson, the two Gardaí who raised the issue of the wiping of penalty points in the first place.

When Ms O’Doherty earlier this  Summer announced her intention to seek a nomination for the presidential election, with her goal of running on a platform of anti-corruption and of being a “voice for the voiceless”, she was met with derision and contempt.

Ms Holland responded to this by calling O’Doherty a “fantacist [sic]” for pointing out that her wages are likely paid by the money the paper earns from advertisements from property companies.

Ms O’Doherty is of course correct in her assessment, however.

Much research has been done on the issue of the Irish media’s role in inflating the property bubble during the Celtic Tiger, with the work of Dr. Julien Mercille of University College Dublin being second to none in this regard.

Also, during the banking inquiry the former editor of The Irish Times, Geraldine Kennedy, described in detail the paper’s reliance on advertising revenue from property companies.

She also mentioned the subsequent pressure her and her paper came under from these same sources of revenue after her paper published an article critical of the housing boom.

She told the inquiry that, “People from the property sector were saying it would rock the foundation of The Irish Times, we would never get an advertisement again and it was damaging the credibility of the country.”

That Ms O’Doherty was correct in her assessment was irrelevant. She had placed herself outside the bounds of acceptable liberal journalism and could be denigrated thusly.

Ms Holland continued her attacks, claiming that O’Doherty “Promises much and delivers little” and, more recently, calling her “delusional”.

This has been the pattern for the past two months in which O’Doherty has been accused of being everything from transphobic to an anti-vaxxer.

All of this, begs the obvious question: Why has there been such a reaction against Gemma O’Doherty as a candidate?

Part of this stems from her work uncovering corruption in Ireland. Corruption in Ireland has always gone on just under the surface. We live in a wink and nod society where malfeasance is regularly covered up and oftentimes not reported in the media.

That Jonathan Sugarman, for example, is not a household name puts our mainstream media to shame. Instead, people like Bertie Ahern, infamous for his corrupt dealings, are rehabilitated on the national broadcaster without comment or question.

Ms O’Doherty’s work in uncovering corruption puts many people in Ireland, who hold positions of influence in the government and in media, and the role that they play in ensuring that the status quo is upheld, on the defensive.

The fact that Kitty Holland can go from congratulating Ms O’Doherty on her victory over INM to lambasting her on social media shows how close to home Ms O’Doherty’s comments and work have hit.

In the case of Ms Holland and The Irish Times, it has to do with the role the paper played in inflating a property bubble during the Celtic Tiger and how it continues to do so today whilst we are in the midst of a rental and homeless crisis no less.

And while this may not be corrupt as such, it is a corrupting influence to have to defer to powerful groups for advertising income, as is the case with The Irish Times and the property sector.

Ms O’Doherty’s work on corruption also explains why the big parties consistently blocked her nomination at the council level.

Her work hits extremely close to home for many a stalwart of the two big parties. Her questioning of the received orthodoxy of the nod and wink culture made her a heretic in the eyes of many a loyal party member.

Granted, it was to be expected that she would come up against attempts to block her nomination and intransigence in general. But the political wall she ran up against must be almost unheard of.

Throughout the country her nomination was obstructed by voting blocs of Fianna Fáil, Fine Gael, and Labour. So while those who exemplify predatory capitalism are perfectly fine as nominees for the presidency, someone of O’Doherty’s ilk must instead be made to pay for the temerity of daring to be a good journalist.

During her appearance on a Broadsheet.ie special livestream on Wednesday the 26th, she made the point that “The party system has failed Ireland.”

She is correct in the sense that given her inability to receive enough votes for the nomination due to the big parties, it shows up the democratic institutions for how hollow they really are.

As has always been the case, representatives took it upon themselves to decide for the wider population instead of deciding with them.

Hence, we have the inherent contradiction of modern representative democracy in which elected representatives pick and choose which aspects of the public interest they themselves deem worthy of political attention.

A filtering mechanism such as this is a fundamental aspect of modern forms of democracy. It allows the leaders to encourage advocacy and debate within strict limits, which ensures the security of the system they oversee.

Any person who goes beyond these borders though is filtered out as a deviant or miscreant.

Ms O’Doherty falls into this latter category given her work and statements over the years. Therefore, the idea of her name appearing on the ballot paper next month could not be countenanced.

Politicians, the media, and journalists all played their part in ensuring that she would be unable to get the required votes for her nomination.

The media’s role in all of this is particularly egregious. For example, The Irish Examiner went so far as to publish a piece questioning her journalistic work over the years.

Enough has already been said about Kitty Holland, a journalist of high rank and large influence. Her former colleagues in the media also played the role of stenographers when they unquestioningly publicised Jimmy Guerin’s comments in which he described Ms O’Doherty as a “conspiracy theorist”.

Mr Guerin, the brother of murdered Journalist Veronica Guerin, was responding to Ms O’Doherty’s comments regarding the role the state may have played in the murder of his sister.

What the media failed to mention was that in an investigation 16 years ago for Village magazine, Vincent Browne and Frank Connolly revealed that the person who likely shot Veronica Guerin was given immunity from prosecution by the state.

In return for this immunity, evidence against John Gilligan was sought; Gilligan being the crime lord the Gardaí were convinced was behind the murder.

None of this damning information was reported by the media in the last two weeks in spite of its obvious relevance and importance.

Ms O’Doherty’s campaign was torpedoed by those intent on upholding the current political and social orthodoxy.

Her views being warped beyond recognition, along with beliefs being attributed to her which are completely at odds with the work she has done and the statements she has actually made, was enough to ensure the fact that her name won’t appear on the ballot paper next month.

In the society we currently live in, certain questions and topics can be raised, others cannot. So, while it might be perfectly acceptable to question the idea of the financial allowances that politicians receive, it is not permissible to question the very system that allows for such a lucrative structure to be created in the first place.

It means that we can question the excesses of society and our politicians, but never the framework or basis on which it all rests.

And while you may not agree with her views whatsoever, what Ms O’Doherty has endured over the last two months should at the very least give you pause for thought.

Her treatment at the hands of politicians and their friends in positions of power in the media demonstrates to us all the contempt that the media and political orthodoxy hold outsiders in, especially outsiders like Gemma O’Doherty.