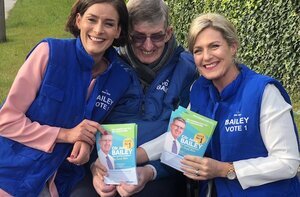 The Maria Bailey story has more legs than a bag of creepy crawlies. Though it is in danger of reaching saturation point, it is still delivering all kinds of oddities.

A commentator on Broadsheet directed us to a Wiki page on John Bailey, Ms Bailey’s father, a Dalkey publican and a Fine Gael politician who has an interesting past in terms of false claims and deceitful practises, along with defences of his actions not unlike Maria Bailey’s defence of her actions.

To win votes in the 2007 general election John Bailey apparently circulated a letter mocked up to look like a Fine Gael directive from the top, the deception reinforced by featuring a photograph of Enda Kenny, the letter instructing people to vote Bailey No 1, for party vote management reasons.

The deceit was later described by the Fine Gael director of elections as a “serious breach of party discipline and unity.”

In 2009, when constituents were protesting about building work in Dun Laoghaire golf club, Bailey wrote to the constituents to say he had objected to the planned development. An Bord Pleanala said no such objection was made. Bailey said it must have got lost in the post.

It later emerged in stories from the Sunday Business Post and the Sunday Tribune that both Bailey and his daughter Maria, had received election donations from the builders engaged in work on the golf course.  Bailey denied that these donations had any bearing on his failure to object to the development.

The point here is, that he took time to actually write a letter to constituents deliberately designed to mislead and give a false impression of where his loyalties lay.

In 2009 Bailey again set out to deceive Fine Gael with another letter, this one designed to block a rival’s daughter from involvement in the selection process for candidates for Fine Gael for the Dun Laoghaire constituency.

The selection convention was cancelled at short notice when three sitting Fine Gael candidates, Bailey being one of them, declared their unanimous view that they should be the only three candidates running in the ward.

The FG executive council agreed. The side-lined candidate sought a court injunction against Fine Gael for failing to follow its own procedures. The case was settled out of court.

In 2010 the Irish Times reported that Bailey had received donations from another building developer which he failed to declare to the Standards in Public Office Commission.

The Sunday Tribune later reported that he had also received undeclared donations from the developers involved in the Dun Laoghaire golf course development. Bailey pled innocent and characterised himself as a hard worker and straight-up Joe. A misunderstood good egg.

In 2013 Bailey created some fake news by designing a leaflet to look like it stemmed from the local Dun Laoghaire Gazette, endorsing Bailey. The Dublin Gazette group sought an apology. Bailey refused and said he didn’t see what the big deal was about.

The big deal was about breaching a newspaper’s copyright in order to deceive the public by passing off a forgery as an editorial in order to gain political advantage.

Fine Gael said they could not condone or support the attempted deceit. Nevertheless, they did accept it, and no action of any consequence was taken against Bailey.

Bailey was involved in sports administration and similar legends pepper his career in that area too, mainly around his apparent ambition to manage the Dublin football team.

He eventually did get to be appointed team manager of the Dublin Hurling team for a short time, after the manager was removed following a string of dismal performances. Bailey was installed as interim manager but the Dublin hurlers refused to train under him.

Bailey threatened to have them all barred from ever playing for Dublin again should they refuse to accept him as manager.

In other words, the good egg threatened to destroy their sporting careers unless they accepted him in a role that he clearly did not earn on sporting merit, but had politicked himself into. The players refused to accept him anyway and he was subsequently replaced.

What is striking about all this is that such a track record has gone unpunished by the Fine Gael party, self-proclaimed upholders of all that is righteous.

A party who represent the privileged and denigrate the ordinary person at every turn, both in terms of attitude and of policy, creating a society where the privileged get all the breaks, while the ordinary people foot the bills and carry the guilt and the burden for failed policies, on the often intimated charge that they have been “lazy” or “weak”.

Clearly Fine Gael are prepared to put up with the sort of moral example the Baileys provide, simply for political expedience.

Then it turns out that Maria Bailey is a second cousin of Simon Harris, the minister currently taking on the task of wrecking the Irish Health service in the interests of privatisation; and though they are said not to be close, the relationship illustrates the small world of the Irish elite. They are in a sense, our 1%.

Maria Bailey said in the RTÉ interview with Sean O’Rourke that the affidavit claiming she could not run competitively for three months after the swing fall was “a mistake”.

But was it a mistake simply because she was caught in a contradiction?

How does that sit with Leo Varadkar, after all the press he created to convince people that welfare fraud was rife? A charge roundly rejected by a former social welfare officer.

It was claimed in The Journal today that a Fine Gael ‘source’ said that they “did not envisage that she [Bailey] would be expelled from the party, stating that would be an ‘overreaction’…”

Instead, the punishment will be that she will lose the privilege of chairing a committee, on housing, of all things. This amounts to a financial loss too, since the role delivers a $9,000 stipend. Losing the chair is a kind of fine, in a way.

But in Ireland over the last couple of years, 11,000 people per year were taken to court for TV license evasion, surely a lesser offence, and often one committed by poor people as a result of straitened circumstances.

Maria Bailey said that it is a personal “tragedy” for her and her family. A family whose patriarch has himself a record in deliberate deceit.

Which begs the question, is this an isolated case, or does the Bailey saga represent a trend among the privileged?

Are the Baileys just overtly careless about displaying an attitude that may have wider, if more circumspect acceptance, among a certain class of people? Or are they freaks?

Maria Bailey supported Simon Coveney in the leadership election that saw Varadkar take the helm. These people are only a few steps removed from serious political power and influence in Ireland.

That should give everyone, including Fine Gael, pause for thought.

Where It Stops, Nobody Knows

67 thoughts on “Eamonn Kelly: Not Far From The Tree”