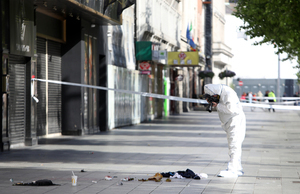 Scene this morning after suspected stabbing on O’Connell St. last night. A man has died following the incident. Road still closed off. Diversions in place. pic.twitter.com/fyy85AjGQf

Gardaí are investigating a fatal assault that occurred on O’Connell St D1 on 11th June 2019 at approx 1.40am. A man was taken to the Mater Hosp and was pronounced dead shortly after. Gardaí are appealing for anyone with info to contact Store St Garda station on 01 6668000

A stabbing on Dublin’s O’Connell St. Gardaí have made an arrest. But have been informed the situation was fatal. This is another example of the complete under resourcing of North Inner City Gardai. #KnifeCrime @DublinLive @98FM https://t.co/Ko2pLvc4Uw

The incident occurred near the GPO on O’Connell Street at around 1.40am.

It is believed the man who died was stabbed several times following an altercation between two men who had previously been talking to each other on the street.

2 thoughts on “In O’Connell Street”