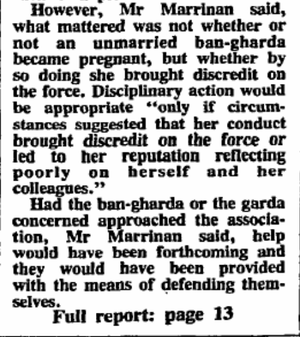 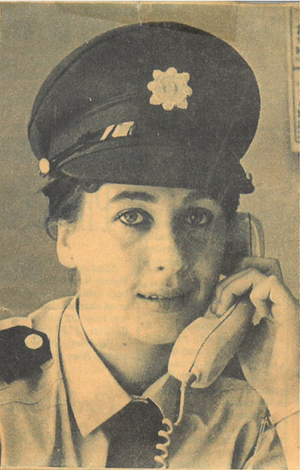 In RTÉ’s documentary The Case of Majella Moynihan, Majella recalled how she fell to the ground when she learned that details of an internal Garda investigation into her had been printed in the national newspapers.

In addition to the articles above, on page 13 in The Irish Times, on February 6, 1985, Mary Maher wrote a background piece on Majella’s story which was headlined: “Did baby bring discredit on the Force?”.

In the piece, Ms Maher reported:

“There have, in fact, been several unmarried ban-ghardai who have become pregnant while members of the force in recent years.

“Some of them at least appear to have been dealt with in a very humane fashion whether or not disciplinary proceedings were involved.

“One woman was transferred following the birth of her baby to a location near her home, where arrangements were made to care for the baby while she continued working.

“In another case, a pregnant ban-gharda was instructed by her superior to marry the father of her child, but succeeded in resisting the instruction and retained her post.

“In another case, however, a recruit who was accepted on the force after the initial medical examination, was found to be pregnant when she was called up several months later. She was dismissed.”

The newspaper articles on Majella, although anonymous, appeared after she was told that she would not be dismissed and that the charges against her – related to premarital sex and giving birth outside marriage – were dropped.

She was informed that the charges were dropped after the then Archbishop of Dublin Kevin McNamara advised the then Garda Commissioner Larry Wren that such a conviction might encourage other gardaí to travel to the UK for abortions.

She told the documentary:

“I was coming in to duty one morning and an inspector approached me on the steps of Store St and said ‘Majella, please come to the office’ and I went ‘Please, Inspector, leave me alone, I can’t take anymore’ and he said ‘You have to come up’.

“So we went up to the office, and there was the papers on the table and he said ‘You’ve made the headlines’ and I remember just falling to the ground and just saying ‘What else are ye going to do to me?’.

“I felt totally betrayed at that stage again, that some member of the Gardaí had given it to the papers. And the charge sheets and everything. The only thing that wasn’t was my name wasn’t mentioned.

“For me, when I saw it on the papers, I just felt totally violated again and that my whole life was out there in the media and that everybody was reading it and it was on the Six O’Clock news as well and I was sitting in the sitting-room and my father was watching the news and he said to me ‘Do you know that girl?’ and I said ‘No’ and little did he know that it was me.”

Earlier: “I’ve Heard From Nobody” 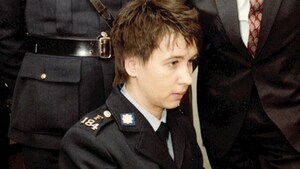 “I’ve Heard From Nobody”

39 thoughts on ““I Remember Just Falling To The Ground””