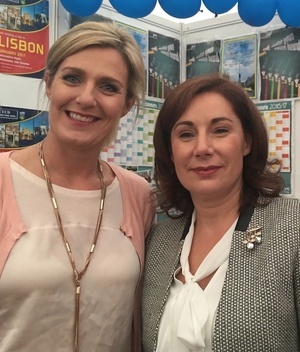 In slapstick comedy and cartoons there is a gag of sequential events resulting in an injury to someone.

In one version the result is accidental; a marble rolls off a table, rolls across a wooden floor, collides with something that falls over and triggers something else into motion, and so on through the sequence until finally a mallet or something falls on someone’s head.

In another version, like in the Roadrunner cartoons or Tom and Jerry, the sequence is intentionally triggered and usually goes wrong, rebounding on the “assailant” who set the whole thing in motion, the story delivering a comic lesson in justice.

After the Maria Bailey scandal broke, the Sunday Independent did an opinion feature in the June 2 issue billed as ‘The Shaming of Maria Bailey’.

In their efforts not to join in on the shaming, Brendan O’Connor and another columnist, Liam Collins, wrote that Maria Bailey was a victim of a system they referred to as “compo culture”.

Meaning, she was advised by legal representatives who, as I understand it, make a living out of encouraging clients to sue businesses for “accidents”, knowingly feeding off the business community by helping people to make exaggerated claims for damages and taking a percentage of the award in legal fees. As a profit-generating venture it’s like some form of commercial incest.

The venture even has a snappy name. Compo culture. It’s like a brand. It’s comfortable, almost respectable. It sounds familiar and kind of roguish. You say it and you think you understand it.

Oh, that’s just compo culture. And you can park it then without worrying too much more about it. It’s a fact of life. Like rain and toothaches. What can you do?

And by the use of the word “culture”, it sounds like a cultural feature worth having, and not just for the legal profession. It sounds like a part of who we are. It’s Irish. Like Guinness, hurling and soda-bread. You have to admire it, with a nod and a wink. It’s mischievous. It’s almost…heritage. It’s certainly entertaining. Art! It’s art, of a sort.

Shortly after the Maria Baily “shaming”, it was also reported in the Irish Indo that an arts group, the ISACS, the Irish Street Arts Circus and Spectacle Network (a satirist couldn’t make this stuff up) had written to the minster for culture, Josepha Madigan, herself implicated as a possible legal advisor in the Baily scandal, making a “plea” with her to do something about the soaring insurance costs that were killing the arts.

Insurance has skyrocketed in response to compo culture and it has made putting on a show practically impossible.

It’s unlikely that ISACS were being ironic in writing to the minister, though it would be great to believe that they were. It’s more likely that the ISACS were genuinely appealing to the office of minister for culture, rather than the person in the seat.

In the same way as Leo Varadkar respects Trump as the current presidential occupant of the white house; the respect for the office superimposed onto the office-holder, regardless of who they might be.

Because the awkward truth of it is, the Irish minister for culture who might right the wrong of soaring insurance costs impacting and strangulating the arts, is also a legal person with a background in compo culture claims, implicated as being the possible legal advisor to Maria Bailey.

This neatly highlights the sequential chain of events that leads from compo culture feeding off businesses, leading to soaring insurance costs and huge profits, arguably giving rise to a monied elite that finds its way into politics until finally the mallet falls on the head of the hapless arts community.

Compo culture has to have a knock-on effect somewhere. And where better than an organization of clowns, literally? It’s likely that Cormac McQuinn, author of the Indo article, was being ironic in writing the piece.

The Minister’s office responded to the plea by regretfully advising the ISACS that the minister “…unfortunately… has no remit in this area and would not be in a position to intervene in this matter.”

Well, that’s okay so. Performance artists can presumably all go and write detective novels instead. No insurance needed there. Not political novels, mind you. That could injure funding potential, and it’s not nice. We’re all in this together, so shush now. Negative thinkers don’t win promotion.

But in case you’re thinking now that the insurance companies might also be victims of nefarious legal eagles, Charlie Weston, also in the Indo, on June 13, published an article showing profits for the insurance industry are up, and not just up, but way up, like 1,318% up, since 2016.

Car owners are taking the main hit, but everyone is taking a hit.

Michael Kilcoyne, Chairman of the Consumers Association, said the situation was a “rip off” for customers. “It is time they started sharing the profits with the rest of us,” he said. “They have a captive market in motors and they charge what they like.”

While car insurance is lucrative, the insurance industry’s main profits are coming from “investment income where insurers use premium income to buy bonds and property assets….” according to Weston.

Which, as I understand it, means they are now in property, like every other greasy-till muckraker on the landscape, let loose courtesy of the bould Leo, he of caring sanctimony now for the climate, envisioning an Ireland of electric private cars rather than buses and trains.

At the same time, the insurance companies are reluctant to provide liability insurance. This has impacted arts (wouldn’t you know it) with the “Promenade Festival, in Tramore, Co Waterford, and the Ballina Salmon Festival in Co Mayo among those to have been cancelled this year, due mainly to rising insurance costs and the compensation culture,” according to Weston’s article.

This story was championed on Facebook by Anthony Carmody of Carmody Moran Solicitors, who I guess felt that the legal fraternity were getting a raw deal in the aftermath of the Maria Baily case.

That in fact, they were victims too.

Let’s see, how many victims have we now?….There’s Maria, for falling off the swing; there’s Josepha, unfairly implicated in advising Maria to take legal action; there’s Leo and the gang, unfairly suffering poor election results because of the debacle.

There’s the hotel Maria tried to sue; there’s Maria again for being shamed; there’s the insurance companies for having to pay out huge damages forcing them to raise their prices and invest in property instead and offer no liability cover for arts events, the poor things.

And now there’s the legal fraternity who feel that Charlie Weston’s article has at least brought some balance to bear on an increasingly ugly picture of the Irish public being nailed for costs at every turn by the thriving cultural elite, all of them somehow “victims”.

Carmody’s blog rant makes for interesting, angry reading. He accuses the media of being the insurance industry’s PR mouthpiece, and the general tenor of the article is that the legal profession is being smeared to take the rap for what is essentially an insurance rip off.

Which is essentially what Brendan O’Connor and Liam Collins were suggesting in their Indo articles.

“If you believe this hype, then every person who takes a personal injury case is on some form of fraudulent mission to take money not only from the insurance companies, but from each and every one of us.”

However, what Carmody seems to be forgetting is that this whole thing began when Maria Baily became snagged on an inconsistency that suggested she was knowingly making a fraudulent insurance claim.

But when she was then cast as a victim of the entire thing, the blame was placed instead on the legal fraternity who are now attempting, it seems, to place it with the insurance companies.

It’s only a matter of time before the cultural elite manage to pin the blame on alleged welfare fraudsters or immigrants. It’s fast becoming that kind of white-collar political bar brawl.

The only way it differs from a classic western saloon free-for-all is that there is a distinct lack of hard-jawed heroes in the melee. Instead, everyone is either running for cover or claiming victimhood.

But the true victims in all this are the public, because clearly, wherever the blame might finally rest, the public have picked up the tab for the bank failure in 2008, are paying over-the odds for car insurance, house rents, house purchasing, and a host of other things, and are receiving under the odds in pay.

All overseen by a government who back employer’s rights to steal employee’s tips, who are busily flogging off public services to the lowest bidder and who have created, either by neglect or design – the results don’t differ – 10,000+ homeless people, who are really the true victims of what appears to be a culture of pass-the-buck political profiteering whose main interests are property and land.

Noam Chomsky, when talking about the tobacco industry’s wilful fudging of science to keep selling a product that kills people, asked, Why is this not considered violence?

Like the slapstick gag of sequential impacts, the initiation: the marketing; and resulting impact: the cancer, are separated by arguably unconnected effects. The tobacco industry made it their business to argue these arguables, creating a playbook that is still used, with relish, by climate deniers.

But everyone can see the lie, they just can’t prove it to the satisfaction of those who don’t want it proved. This strategy is also arguably a violence against science.

Similarly, in light of the recent report led by Dr Mel Nowicki, the homelessness that is having a “destructive impact” on Irish children might also be seen as a violence against them.

They are at the receiving end of a sequential chain of cause and effect. A sequence initiated by a leader who ideological policy is causing those children measurable psychological harm and stunted development.

The connection between policy initiation and the later destructive effect on these children is as clear as day. It might even be construed as a form of abuse, since the initiator can’t plead ignorance of the knock-on effect of the policies pursued. The results have been scientifically measured.

Abuse of children by policy neglect? Any legal people out there who might develop this hypothesis? If you’re not too busy chasing ambulances.

We maybe haven’t changed as much as we like to think from the days of reform homes and Magdalene laundries. Sometimes it seems it’s just a different set of authority figures; more photogenic, smoother in PR, but still damning the sinners while enjoying the perks of power; niftily avoiding accountability when things go wrong.

And still abusing children? Indirectly, maybe, through socially unjust policies, but the results are more or less the same: the kids are damaged, but the profits are healthy and the organisation is sound.

Guess you already have seen this. Sharp exhale when I saw it. pic.twitter.com/NHYHed9WCo

3 thoughts on “Eamonn Kelly: The Buck Stops Somewhere Down There”