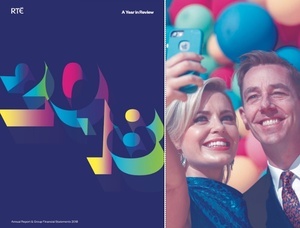 Yesterday, RTÉ published its annual report which revealed a deficit of €13m for 2018.

My very first column for Broadsheet was a walkabout through the RTÉ Year that was 2016. The following (which didn’t make the final cut) is from that first draft back in July 2017:

“Another item s the Orchestra – 7.1% (€12,716,100) Now I would like to think that that activity could pay its own way, and with 211 whole-time staff allocation I feel it needs to be more Value for Money focused rather than its optic and isn’t it nice all the same. Isn’t that what the Arts Council is for?

Yes, I thought then the orchestras were an indulgence in RTÉ, my reasoning was that it’s not their core activity it didn’t deserve to be underwritten by licence payer.

So here we are two years on, and the same expenditure item now – in the just published 2018 report –  has a great big red nose.

So red in fact they went to the trouble of commissioning a report from Helen Boaden of Mediatique to devise a strategy around the future of the RTÉ Orchestras; you’ll find this was introduced to us by the Chair Moya Doherty (pg 18) in the meantime, rightly or wrongly, I’m finding it difficult to put any faith in a firm called Mediatique.

So back to the basics. I will remind you all again that the purpose of published accounts is to allow the user to form their own opinion. Therefore, what follows here is not meant to confirm your opinion or to proffer advice.

In between all the glamour shots of the same faces and bragging statistics, you’ll find this
“RTÉ scored 39 of the top spots on TAM Irelands most watched television in 2018” (pg 6.)

The issue I have with information like this being introduced is that it shouldn’t be left naked of any quantitative detail to allow comparison.

Like; 39 out of what? Were these 39 places 1 to 39 or were there scattered throughout the field? How much of these places were won by own content?

Director General Dee Forbes has had two full financial years under her leadership, 2017 and 2018, (she commenced mid 2016) yet blames Brexit and changing media consumption for the drop in Commercial Revenue (down 1.6m btw. Pg23) and specifically name drops advertising spend and paltry currency €:UK£ takings.

In other words, RTÉ is operating along the basis that revenues are outside their control.

The reason I’m irked is that over the previous columns I have flagged that lack of strategic investment in creating marketable and new content, content that can be sold and exported. Licenced content owned by RTÉ that is not just old news archives. Content that is not fronted by the same faces.

Every bill RTÉ has to pay is pretty much underwritten by the State, so why should we not expect them to be adventurous and ambitious, and take risk with new content, and with new writers and formats?

It’s a very disappointing turn up for me about Dee Forbes, it is her job as CEO to take responsibility, and blaming outsiders for falling income is a tell-tale sign of poor leadership.

Another example is her reference to the monies paid to An Post for collecting the licence; (31.9m pg34 + 9.59m pg30) she actually uses the expression “Not fit For Purpose.” 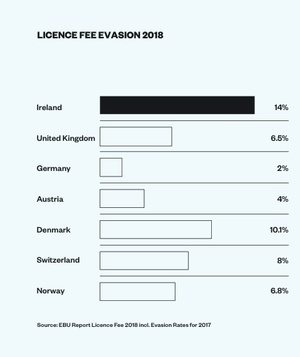 She further enhances her point about Ireland’s licence evasion level (14%) with a barred remark that came with a graphic (above) to suggest we are the boldest audience in Europe.

If you were expecting to note some financial markers from me, I have to admit there came a point in the report that I just had enough of it. It was like watching a repeat, of a repeat; which sums up RTÉ very well.

But here’s one I would like to draw your attention to; operating costs are up €5m. Special Events apparently.

Despite their attempt to treat the Presidential election as a special event; IMO it should be accrued over 7 years and it’s obviously in the programme planning.  But that’s it with accounting jargon, since I’m unable to see past the Sustainability and Going Concern issues.

For example, their Papal visit coverage was indulgent, lurid even, while their awe was unreciprocated by their audience. It was 1979 in approach; yet somehow this report will insist it’s the Irish audience’s fault for not paying their licence or that there are “more homes without traditional television.”

In my view these operating costs are only going to go up, which is why I’m drawing attention to it because salaries are about to be reinstated to their full agreement pre- the Voluntary Redundancy/ Early Retirement schemes which probably have had their run.

Just a number of items before I go, on page 29 there is mention of Legal Proceedings. Nothing so see here perhaps, since all public profile entities are dealing with multiple sets of proceedings at anyone time. But you know, I think we were entitled to at least know the value of the provision being set aside, don’t you?

On page 148 Note 26: Related parties’ transactions, specifically (b) transactions with Key Staff / Board members and or their connections; €1.1 million in the year. Oh look, it’s down on €1.4 million in 2017. And that’s all we’re getting.

But I want some more. I want to know who got what from both those sums, down to the last cent; and so should everyone else.

The report was 164 pages, take out the pictures and bragging and you’re left with an organisation that is burning at both ends and using excuses as a fire blanket.

I’m obliged to introduce you to one new face, especially since he beat me out to that seat on the board, Mr Ian Kehoe. To be fair though, I wasn’t even shortlisted by State Boards and the Minister.

Open to correction since I might have been singing or something at the time, but I didn’t hear Mr Kehoe being introduced as a Director on the RTÉ Board the last time he was on the wireless? Did you?

If we expect it from the Sunday Business Post and the siblings of Government Ministers, we must surely insist RTÉ do the same.

What "restrictions" prevent @RTEplayer allowing this in the north?

Do @RichardbrutonTD and @deeforbes_dee know? @rte Charter says "the national broadcaster" is "to have the character of a public service…universally available to the whole community on the island of Ireland." pic.twitter.com/tie7tbmy4v

32 thoughts on “Reeling In The Year”