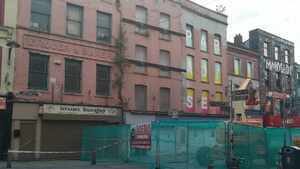 I can’t say I didn’t know what I was getting into. I’m not lacking for things to do, or issues to respond to. A re-baptism of some heat, if not exactly fire.

My electoral area contains the island City Centre. At its core is the historic spine of the city. Joined on the northside by Shandon Street, led out on the southside by Barrack Street.

In between are North and South Main Street. Once the beating heart of a proud city, years of neglect have reduced the streets to a shabby shell.

North Main Street had carried a particular pre-eminence. The city faced northwards. The North Gate its imposing portal. Here stood Skiddy’s Castle. A seventeenth century stone carving of the City Coat of Arms, its only remnant.

Here is the birthplace of Terence McSwiney, the commemoration of whose death we are meant to be marking in 2020. The plaque identifying the house where he was born, is now semi obscured by a defunct neon sign.

Where North Main Street begins, and South Main Street ends, there are a number of Eighteenth century buildings. Each has had various stages of uses. One through embossed lettering on its frontage, continues to boast its once much loved status as Hosford’s Bakery.

Like much of North Main Street these buildings, and the streetscape they compose, have been listed in the National Inventory of Architectural Heritage.

However there has been no parallel listing of these buildings as protected structures in the Cork City Development Plan.

In December 2015 these four buildings were placed on Cork City’s Derelict Sites Register. Joining them was a large site further up North Main Street which housed a business known as the Munster Furniture Centre.

Unfortunately that business would soon become the victim of a curious fire that would raze its premises to the ground.

Not a penny of the Derelict Sites Levy due to Cork City Council, for these properties, has been paid since.

Last week a partial collapse occurred in one of the buildings. The owners of the building, who prior to this had shown complete indifference towards maintaining them, moved with great alacrity to commission an engineer’s report suggesting demolition.

Soon a demolition company were on site. The expectation being that the City Council would pay for the demolition work, creating a newly cleared site that would be infinitely more commercially valuable.

The narrative being created of entrepreneurial souls who had taken a punt, at the wrong time, is utter bollocks.

Greed has been the only motivator throughout this saga. Negligence and contempt of the City we love, the only tools that have been operated by these sleeveens.

In a dramatic change of tack Cork City Council has been facing down these ingrates. By making it clear that no public money would be used to demolish these buildings, we may have crossed The Rubicon (or at least the North Channel of The Lee) in how we deal with dereliction in Cork.

Let’s be having more of it.

14 thoughts on “Dan Boyle: They All Don’t Fall Down”