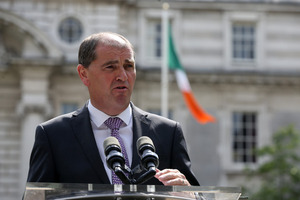 From top Paul Kehoe, Minister for State at the Department of Defence; Derek Mooney

A few weeks back I discovered online that one of my favourite London pubs, the Coach and Horses on Greek Street in Soho is about to change hands.

The pub is both iconic and historic – and not just because I’ve been swigging pints there on visits to London since the early 1980s.

It has been the watering hole of Dylan Thomas, Francis Bacon, Lucian Freud, Louis MacNeice, Graham Greene and countless other journos, actors, artists and Bohemian hangers-on.

The pub is just across the street from the offices of the British satirical magazine, Private Eye, and has hosted many of the Eye’s infamous off-the-record lunches in an upstairs private dining room.

The design and layout of the main bar was immortalised as the set for the play based loosely on the life of one of its most infamous denizens, the notoriously unsober Spectator and Sporting Life humourist, diarist and columnist, Jeffrey Bernard.

One anecdote, and there are many about Bernard, tells you almost all you need to know about the man. In the late 1970s he was offered a very generous advance for his autobiography.

He promptly wrote to the letters page of the New Statesman announcing that he had been asked to write a book about his life and would be very grateful if anyone could write to tell him what he had been doing between 1960 and 1974. Funny, self-deprecating and totally dissolute.

Sometimes Bernard would become so ensconced in the Coach and Horses that he would neglect to submit that week’s “low life” column. On such occasions his editor would insert the legend: there is now “low life” column this week as Jeffrey Bernard is unwell.

Jeffrey Bernard is unwell, a euphemism that became his calling card.

Not that non-submission of copy was the only grounds for not publishing his work. On some occasions Bernard would remember to submit a column but the editor would still choose not to run it, instead running a banner proclaiming: Jeffrey Bernard’s column does not appear this week as it remarkably resembles the one he wrote last week.

Which is all a very roundabout way of getting to the topic of today’s Broadsheet column – though to my credit this is borrowed more from one from early June not last week.

In essence, what I am about to say now is a restatement of what I said in Poor Kehoe has To Go, a month ago.

Four weeks back I wrote that it was long past time for Minister of State for Defence Paul Kehoe to be moved out of that department and moved somewhere… anywhere… else. I suggested that he might trade places with Minister of State David Stanton, currently in the Department of Justice.

The stumbling and bungling by Kehoe over the past few weeks, especially the last few days have only served to strengthen the case for Kehoe to go.

As Broadsheet highlighted yesterday he has seriously put his foot in it offering contradictory reasons as to why two naval service ships are currently on reserve and cannot put out to sea. A mistake he compounded by going on to TV, radio and social media to repeat it several times

Kehoe’s version is not just at variance with the reasons set out by senior naval officers, it has since been debunked by his boss, the Cabinet level Defence Minister and Taoiseach, Leo Varadkar – though not before the Taoiseach managed to confuse matters even further by not knowing how many ships are in the Irish naval service fleet (hint: the answer is 9).

Don’t forget Leo Varadkar is the Minister for Defence, Kehoe is merely the junior minister, albeit one more regularly in contact with officials.

So, why shouldn’t Kehoe simply be sacked? Well, not because he hasn’t messed up. He has and managed to do it publicly over the last few days. But he shouldn’t be sacked as that only serves to single him out as a scapegoat.

Though Kehoe has been at the Department of Defence for eight years (since Fine Gael came into government at 2011) and has as much ownership of the current state of defence dysfunction as it is possible to have, he has never been the source of the mayhem. He has never ever been the senior Minister there.

For almost every day of his stewardship there has been a succession of cabinet level Defence ministers who had the ultimate responsibility in law and in fact for the policy side: from Alan Shatter to Simon Coveney to two Taoisigh: Enda Kenny and now Leo Varadkar.

All have been part-timers, each also held responsibility for another significant government department.

Shatter: Justice, Coveney: Agriculture, Kenny and Varadkar: Taoiseach. Almost none of this fab four gave defence the level of attention it needed at cabinet table discussions, especially when up against the departments of Finance and Public Expenditure, while Kehoe simply never had the political clout to win against the lads in Merrion Street.

Kehoe was given an impossible task, his error was in accepting it knowing the limitations. His secondary error was in staying on too long. The far greater mistake was in knowing all this and still putting Kehoe in the position. The blame for this bigger mistake lies with Kenny and Varadkar.

Instead of just blaming everything on Kehoe and having a quick pre-Summer political hullabaloo that is over in a few days, the way to move forward constructively is for An Taoiseach, to borrow a phrase from the naval service note, “…to consolidate and regenerate… cut our cloth” and reassign Kehoe.

Minister of State, Stanton, be on standby.

3 thoughts on “Derek Mooney: A Coach And Horses To Shift Kehoe”