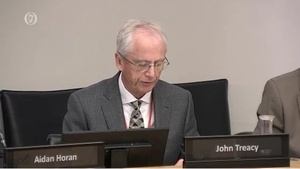 John Treacy tells Pádraig Ó Céidigh TD that the FAI is currently being funding by UEFA, but that is money being loaned to them. Mr. Ó Céidigh says that could cause a serious going concern – could be cashflow concerns. Mr Treacy says yes, FAI will most likely need a UEFA BAILOUT