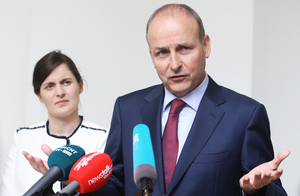 “I think the no-deal scenario opens up such potential economic disruption and is uncertain and cannot be foreseen, despite all of the analysis we’ve had in terms of what will happen, that I think it would be irresponsible to provoke a general election in the next number of months…

…I am told the ports are not ready. Dublin Port is not ready for a no-deal Brexit, despite what you hear.

I am told by people who know the port… that mayhem will ensue.

That has to be the essential prerequisite of any political party in the country.”

Provoking a general election would be ‘irresponsible’ – Martin (Irish Times)

10 thoughts on “Do I Look Irresponsible?”