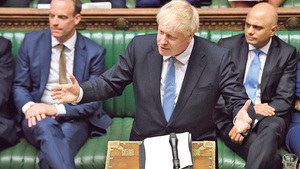 “The PM has been setting out to European leaders the position … that the Withdrawal Agreement with the backstop has not been able to pass parliament on the three occasions it was put in front of parliament. Therefore it needs to change,”  a spokeswoman said on Monday.

“The prime minister would be happy to sit down when that position changes. But he is making it clear to everybody he speaks to, that that needs to happen,”

….Britain’s Foreign Secretary Dominic Raab said the backstop must go and that £4bn has already been allocated for leaving the EU, with further funds to be set out by the finance minister.

He described Brexit as a “win win” for the UK and the EU.

“We want a good deal with EU partners and friends but that must involve the abolition of the undemocratic backstop,” he told the BBC.

48 thoughts on “Not For Turning”