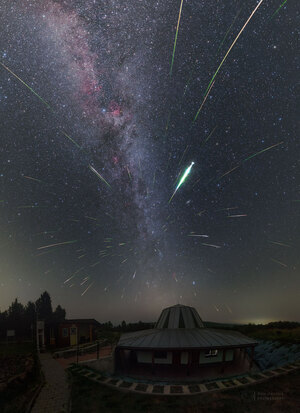 Did you catch the annual Perseid meteor shower last night? Of course you did. But it didn’t look like this. Because this (with a little technical adjustment) is what it looked like last year over Slovakia. To wit:

The featured composite image was taken during last year’s Perseids from the Poloniny Dark Sky Park in Slovakia. The unusual building in the foreground is a planetarium on the grounds of Kolonica Observatory. Although the comet dust particles travel parallel to each other, the resulting shower meteors clearly seem to radiate from a single point on the sky in the eponymous constellation Perseus. The radiant effect is due to perspective, as the parallel tracks appear to converge at a distance, like train tracks.