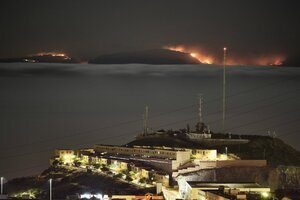 The Canary Islands this morning in a view taken from Santa Cruz de Tenerife island, Spain

Wildfire rages out of control on one of Spain’s Canary Islands, forces thousands to flee on Gran Canaria. https://t.co/OUJVV2hyYS

The blaze — described by the local fire department as “a monster” — was racing across parched woodlands into Tamadaba Natural Park, regarded as one of the jewels on Gran Canaria, a mountainous volcanic island in the Atlantic Ocean archipelago off northwest Africa.