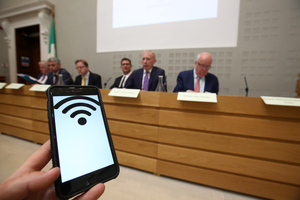 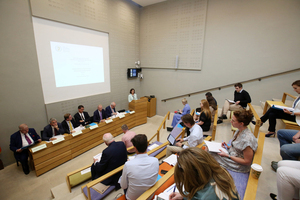 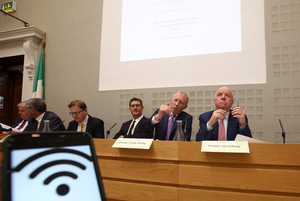 Watch the Launch of the JCCCAE Report: an investigation to examine the National Broadband Plan process thus far and how best to proceed and the best means to roll out #Rural #Broadband here #Seeforyourself https://t.co/7PnWa2dUrj

At the launch of a report by the Oireachtas Committee on Communications, Climate Action and Environment – following an examination of the National Broadband Plan process so far during May, June, July and August.

The report contains 25 conclusions and 10 recommendations which include

The Government should commission an external, independent review on whether its proposals (and the costs) are the only viable option.

A new cost-benefit analysis to be carried out before the final National Broadband contract is signed, commissioned by and developed independently of Government Departments.

The Comptroller and Auditor General should have a role identifying cost overruns in large infrastructure projects.

All infrastructure developed through the National Broadband Plan should remain in public ownership.

Government should re-engage with the ESB to examine the best model for delivery of a new National Broadband Plan through the ESB.

Chair of the committee and Fine Gael TD Hildegarde Naughton told those present:

“As you’re aware this report was endorsed by a majority of the committee, by five votes to three, and it’s well known that the Fine Gael members of the committee, of which I’m a member, did not agree with the report and I totally respect the democratic decision of the committee which I chair.”

“Ultimately it’s going to be up to Government now to make the call. They have to decide can they change this? And if so, how do we do it in a timely manner?

“If we don’t change it though, that sends out a message that worries me. That we’re engaged in consultation that isn’t, you know, real. You can look at ideas but actually once you’ve started on a path, you can’t diverge.”

“KPMG said it would take five years if we were to start this process again – that we could actually come to where we are today. They’re the experts in the field, going through this procurement issue. The department said it could take three to five years. So that’s what the actual experts told us.”

“But no member of the committee had a potential guest or group refused admission. So everybody that was wanted to be there was listened to.

“….We’ve exhausted all levels of inquiry. There is nothing new to learn here.”

“And you do that by taking 20 per cent of the homes out of it. In other words, defeat the whole purpose.

“…Why is it €3billion?…It’s actually €2billion net because there’s…effectively…up to €500million in there as a contingency in case things go wrong. There’s €345million for the VAT. So, effectively, it’s being stress-tested in terms of cost.”

“…Would a further inquiry throw up something we don’t know? The answer is no. Can we reduce the cost? No, without literally defeating the whole purpose of the exercise and discriminating against a chunk of rural Ireland. And thirdly, should we go ahead now? Absolutely so.

“People talk about State ownership as an alternative. That train left the station when we sold Telecom Eireann….irrespective of that, we have all the advantages of nationalisation in the plan, in this sense, that we will get 60 per cent of excess profits during the run.

“And there is, based on the UK experience, there will be a much larger take up than is anticipated. And we’ll also get 40 per cent of the value of the entire outfit, the entire NBI at the 25-year mark and they’ll be committed to another 10 years to 35.”

“…there’s a lovely old rural expression. That emanates from an agricultural society that I’m proud to come from. And it says you cannot go on weighing the pig. You must, at some point, start feeding it.

“…I feel, like somebody from the country listening to this, that all the logic could be in delaying this could be to discriminate against the people for whom I come and represent.”

“Nobody, nobody has come up with an alternative, plan B, that is legally viable. Nobody, not even the minister. All the experts that came before us. Not even the recommendation of this all, cross-party, committee report. There is no plan B here. It’s just go out again, review it again.”

“We can have another hearing if we so wish, maybe in the Dáil. I’m happy that the work of all members of the committee has done in trying to get to a position of which there are recommendations now.

“So we’re making recommendations to the Government. We can bring that through if we get time in the Dáil and have another debate…it won’t change. It’s still an option for the Government to either accept or ignore the committee report. So a discussion and debate in the Dáil, I don’t think will change the Government’s mind one way or the other.

“We’ll be advising them from an Opposition perspective which is what we have done every step of the way. We have raised very serious concerns for the past two years and we continue to act as a responsible Opposition.”

22 thoughts on “‘No, We Won’t Be Bringing Down The Government On This’”