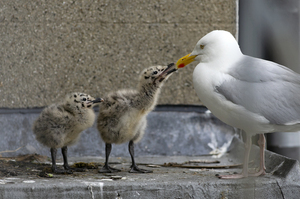 We’ve taken away the herrings from herring gulls, and most of the other fish in the sea, then built on their nesting sites.

We have in fact destroyed their environment. So the gulls have had to come inshore to feed and nest.

Being a raucous and dirty bunch ourselves, we congregate in large numbers, make lots of noise to advertise our presence (particularly in Temple Bar!) and leave lots of “food” (waste) lying around on the ground, in bins and in landfill sites.

We also, conveniently for the gulls, carry it around in our hands as we walk, and lay it out on rugs and tables. The only way to reduce seagull populations in cities is to conduct a major cull of waste bins and outlaw eating outdoors, particularly while on the move.

In other countries, Japan for instance, there are no public waste bins, and eating on the street is considered particularly uncouth.

It is patronising to say that Bird Watch Ireland “has yet to catch up with the fact that […] they have become pests”.

Its role is to protect birds, not humans. Nor are herring gulls “oversized”. Many will die from starvation from a stomach full of plastic, thrown away by humans.

We need to stop the environmental destruction caused by our lifestyles and stop blaming gulls for a problem they didn’t cause.

Related: Why it is time for a cull of seagulls in Dublin (Frank McDonald, The Irish Times)

Meanwhile, At The Docklands