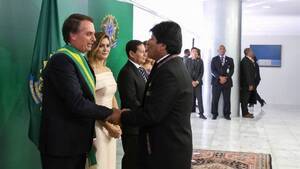 I have been reading an interesting article on the wider implications of the Amazonian rainforest fires.

The article is unstinting in its portrayal of Brazilian President Bolansaro as an ignorant oaf dedicated to inflict as much environmental damage as possible, whilst encouraging others to do the same.

But Bolonsaro is far from being the only villain of the piece.

Dozens of rivers comprise the Amazon drainage basin. The furthest away of these reach as far as Bolivia.

There an equally demagogic President (Morales) is encouraging proportionately greater clearing of the rainforest.

Morales has been something of poster boy for progressive politics. His record since his first election has been spotted. He can point to some economic growth during his reign, but also a dimunition of democracy.

A new Constitution introduced in 2009 contains several clauses that speak in glowing terms of protecting natural resources and the environment. There doesn’t seem to be any real application of these warm words.

The same Constitution placed a restriction on the number of terms that can be served by a President. Morales wants to increase this to three terms from the current proscribed two term limit.

In fact it would be a fourth term for Morales, as he doesn’t count the term he served before a new Constitution was introduced.

Bolonsaro and Morales would be placed on different ends of the political spectrum. Although when it comes to demagoguery, however democratically legitimised, they are no different from each other.

The same can be said of the effects of their respective environmental policies. While Bolonsaro can be said to more honest in his contempt for the environment, the damage being caused in Bolivia is just as bad as that occurring in Brazil.

There should be no surprise in this. Environmental policies have never sat easily in being defined through the traditional right/left political axis.

Throughout the twentieth century smokestacks were just as highly thought of as economic status symbols in communist/socialist countries as they were in the most avidly capitalistic ones.

Political analysis dealt with mechanical change, then subsequently techological change, in the same way. Capital and Labour were the only inputs that were ever worthy of consideration.

Whatever economic system has been in place, particularly during the twentieth century, there has been a shared addiction to a carbon fix, resulting in a shared responsibility for the crisis the planet now finds itself in.

We need now to define the means of production differently and better. We need to collectively manage, preserve and protect the environmental inputs of air, water and soil.

This is what now we should define what we see as economic well being, and especially how we should be bringing about social fairness.

A similar Bolonsaro/Morales axis can be seen with the current holders of the highest office holders in the United States and the United Kingdom.

Trump, in that unique fantasy land he inhabits, declares himself an environmentalist, even though his every action is antithetical to bringing about a health environment.

Johnson speaks a better game, but he and his ilk are dedicated to a deregulated world that will drive environmental degradation ever more quickly.

The moral here is to judge political leaders only by what they do. A lesson that our Taoiseach and his government seem particularly slow to take on board.