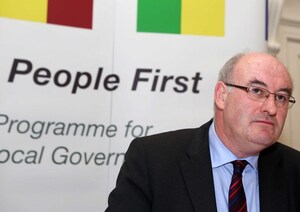 Former Fine Gael TD and Minister for the Environment Phil Hogan was confirmed as the EU’s next chief trade commissioner.

The appointment of Phil Hogan to the role of EU trade commissioner for the next five years will see him go up against the UK’s negotiators in talks – if the Brexit process gets that far.

During Brexit talks he has developed a reputation as the Commission’s attack dog: In June last year he said the tide was going out on the “high priests of Brexit”, suggesting the British public were finally seeing through the “deception and lies” of politicians like Michael Gove and Nigel Farage, who he named.

Why Phil Hogan Is Misunderstood

The Boos Of Mooncoin

13 thoughts on ““The Commission’s Attack Dog””