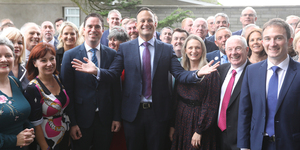 From top: Taoiseach and leader of Fine Gael, Leo Varadkar wth members of the Parliamentery Party at the annual FG Autumn Think-In, at the Garryvoe Hotel in East Cork last week; Derek Mooney.

Not only did they free Ministers up from having to hang around Leinster House answering awkward questions, on and off the record, from smartass opposition TDs, irritating journos and panicking backbenchers, they were a time for the government parties to get back on message and hopefully get their poll numbers up.

The idea was that Dáil sittings broadly tend to favour the main opposition parties when it comes to opinion polls, as their insolent haranguing of the Taoiseach is featured nightly on the TV news.

The high visibility, and audibility, of the Taoiseach over the summer would suggest that his team subscribe to this wisdom. He was seen to be out and about. His appearances at the Kennedy and MacGill Summer Schools and the West Belfast Féile an Phobail went down well.

He was well received by the audiences at all three and got plenty of column inches and airtime on foot of them. Not to mention his bravura Athena performance greeting Boris Johnson at government buildings two weeks ago.

The Taoiseach had a good summer. He used the Dáil recess to maximum effect. With no Dáil platform for Micheál Martin and with Mary Lou MacDonald still reeling from the decimation of the Local and European elections, not to mention the brewing row in Northern Ireland on the direction in which she is taking the party, the Fine Gael media operation virtually had the place to themselves.

All of which makes the latest Red C polling numbers so worrying for Fine Gael.

They show Fianna Fáil and Fine Gael neck and neck in the run up to an election which the Taoiseach says is no more than eight months away, but which many suspect will be done and dusted by then. (As an aside – the Taoiseach first publicly confirmed the May 2020 election timeline at the Kennedy Summer School.)

The poll confirms something I discussed here at the end of April. Back then I was writing about a B&A/Sunday Times poll.

At that point 45 out of the 46 polls conducted since July 2017 had Fine Gael ahead of Fianna Fáil. The B&A/Sunday Times poll was the first national opinion poll to put Fianna Fáil ahead.

I wondered if those results would be repeated in the May 2019 local elections and said, if they were, that they would mark the first big shift in public opinion since Leo Varadkar became FG leader and Taoiseach in June 2017.

The Local elections broadly confirmed the B&A/Sunday Times poll. They saw Fianna Fáil get 27% of the first preference vote, ahead of Fine Gael on a little over 25% and Sinn Féin on just under 10%. And now we have this Red C poll to confirm the trend.

What will worry the Fine Gael strategists even more than their disappointing poll numbers is the emergence of new domestic issues where the government is seen to be floundering and ineffectual.

They already had the twin sagas of housing and health, now they have the beef crisis and the Personal Services Card debacle.

I do not include Brexit on this list, not because it is not a potential crisis of immense proportions, but because the backroom strategists will not see it as an electoral negative for Fine Gael right now.

As Red C’s Richard Colwell argues in his analysis of the latest poll:

“Fine Gael have been seen to perform well throughout the negotiations and are seen as safe pair of hands with regard to Brexit… Even a third of Fianna Fail voters see Varadkar as the best option to lead on Brexit.”

At a time when the domestic political agenda is slipping away from him and his government is perceived as a do-nothing administration, Brexit could be perversely seen as one of the very few bright political spots on Varadkar’s horizon.

Almost everything Varadkar and his government do over the coming months must factor-in Brexit. But as they are not in control of Brexit. Their scope to yield political benefits are, at best limited. All Varadkar can do is manage his political responses to events.

This includes the holding of the four by-elections following the election of Billy Kelleher, Frances Fitzgerald, Mick Wallace and Clare Daly to the European Parliament.

The opposition would like to see the four by-elections held before Christmas, ideally in November.

Whether the government would be equally as thrilled is another matter, though it knows it cannot forestall their holding and it is probably better to get the pain of three or four defeats in one day out of the way sooner rather than later.

Indeed there was talk up to a few days ago that they might be held alongside a referendum to extend voting rights in Presidential Elections to Irish citizens in Northern Ireland and beyond (the Bill providing for such a change has just been published by the government).

These plans seem to have hit the rocks. It is said that the detailed work to implement such a change is behind schedule.

This may be fortuitous. It was not the wisest move to think about holding a referendum to extend voting rights to the North, even if only just in presidential election, just at the moment when the Brexit debate is at its most febrile.

But when is there ever a good time to talk about anything when Brexit looms on the horizon? Not anytime soon, it seems.

We Back A Two-State Solution, So Time To Recognise Both

Derek Mooney: Setting The Date To End Confidence And Supply