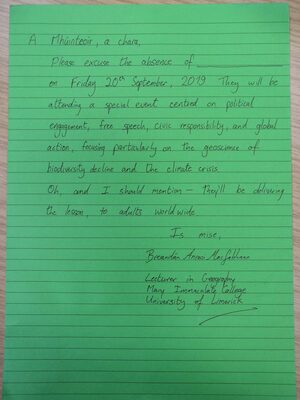 It’s being reported in The Irish Times that the principal of Blackrock College Dublin Alan McGinty has written to the parents of school’s students, telling them that tomorrow’s school climate change strike is “a tad infuriating” .

He also urged parents to ensure their sons don’t take part in the event.

If any Blackrock college parents still want to let their kids strike, here’s [above] a permission slip.

“It’s For The Children, Because I Didn’t Have It”