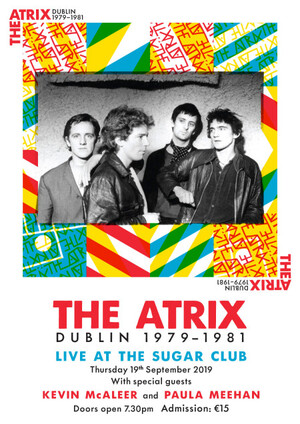 The Atrix – Teasure On The Wasteland

Like a phoenix from the embers of Dublin’s fabled post-punk new wave scene, The Atrix have risen.

Tonight a reconfigured line-up featuring two members of the original band (Hugh Friel now sings in place of the late John Borrowman) as well as Horslips‘ Jim Lockhart on keyboards plays The Sugar Club, Dublin 2, where they will launch a new retrospective album of their finest songs.

With perfect timing, a new video for the band’s seminal 1980 (Midge Ure-produced) hit Treasure On The Wasteland (above) has just been uploaded to YouTube directed by Alex Bradley of Guns And Butter.

It’s a visually stunning piece of work that does justice to the pioneering spirit of the group when they were in their pomp.

If you want to read a definitive in-depth feature on the history and legacy of The Atrix then check out John Fleming’s piece in the Irish Times here.

The Atrix at the Sugar Ciub (Sugar Club)