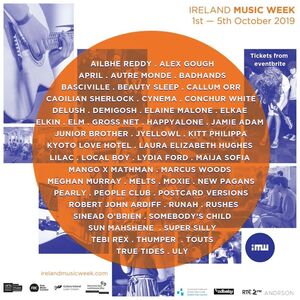 The annual festival showcasing the best new talent in the country that was once called Hard Working Class Heroes and is now called Irish Music Week is almost upon us.

Among the dozens of local acts performing in multiple venues across the capital will be a number of artists that we have covered here on Broadsheet including Basciville, Sun Mashene and Laura Elizabeth Hughes. And that’s not to mention all the music industry conferences full of movers and also shakers.

If you would like to win Two FREE passes giving access to both the concerts and the conferences simply tell me below who is your favourite new Irish artist and why.

The winner will be chosen by my robot butler Cyril.

Lines close at Extended until 11.45pm.

Thanks to Liza Geddes at Recode Publicity.