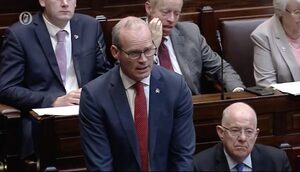 Tanaiste @simoncoveney saus UK #Brexit proposals on the role for the NI executive “is not consistent with the Good Friday Agreement.” pic.twitter.com/AgiUVSGMdt

Latest UK #brexit proposal “wont be the basis of a final agreement but I hope it can be a stepping stone in that direction” – Tanaiste @simoncoveney tells #Dail “Ireland has not been treated well.” pic.twitter.com/gMEJKtfuEa

Opposition support for the Irish Gov position is expressed in the #Dail where Fianna Fail @darcalleary says the British need to understand that the border is about so much more than economics #brexit #Border pic.twitter.com/EyNl76lTHv

UK, not EU, needs to do further work on Brexit offer: Brussels (RTE)

Taoiseach: 2 major obstacles: customs, I don’t fully understand how we can have NI + IE in sep customs unions + avoid having tariffs + checks on goods. Secondly, issue of consent + democracy is important, any consent mechanism must reflect the views of the people in Ireland + NI

4. UK staying in CU SM, Norway option
5. The backstop
One of those five ways could do this, at least four of those wd be acceptable for the Irish govt

“There Isn’t A Plan”

3 thoughts on “Meanwhile, In The Dáil”