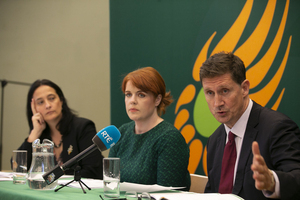 It has been ever thus. For thirty years I have listened to commentary that there isn’t any need for The Greens to exist, as other political parties have always been prepared to steal our ‘clothes’.

The problem with this often facile type of analysis is that it disregards the indifference, and more often contempt, the wider political system has displayed towards environmental issues during that period.

Sure pieces of clothing have been stolen, but the scale of environmental crises has sadly seen the Green wardrobe increase disproportionately.

And those stolen items have often been worn quite badly. Sometimes inside out. Sometimes back to front.

Much the same with the lack of depth in those clothes stealers having any real understanding of the crises we face.

Buzzwords get seized upon by those who want to don green apparel. Such terms get repeated ad nauseum to convey the impression of understanding, because in politics it seems perception is far more important than action.

Early in the lifetime of the Green Party in Ireland, a debate occurred on whether it should become a political party, or not. Far better, it was argued by some, to be a campaigning group seeking to ‘green’ political parties from outside the political system.

The political party argument won out for a number reasons. One fairly obvious factor was the prior existence of campaigning organisations.

A more persuading reason was a prevailing belief that the political system, with existing political parties, were beyond persuasion and had to be challenged.

Any movement needs to weave several threads together – the political, the educational and the campaigning. The past ebbing and flowing of Green support can partially be put down to these threads never pulling together strongly at the same time.

That isn’t the case now. Against that it may be the case we are now living in a period of peak environmentalism. If we are then we so badly need to make that count.

Pennies are beginning to drop, when pounds/dollars/euro need to. Public goodwill is at its most disposed towards taking necessary environmental action.

The political debate has been won to a certain extent. We continue to have a problem. The ability/willingness to address that problem has become a problem in itself.

A business as usual approach is incompatible with addressing our environmental crises. Saying the right thing, and being more concerned with the superficial, when not accompanied with appropriate action, makes those politicians, who choose this approach, to be very much part of the problem.

The climate deniers will always be with us. Far more dangerous are contrarians, agnostic on the science, but possesed of some pathological distaste for Greens, who they identify or engage with in stereotypical terms.

Often they can’t even agree on the stereotype. Terms, always used perjoratively, like naive, effete, middle class, or when the context demands it ‘crusty’, interchange solely as means to undermine the existence of environmental problems or to avoid necessary policy choices.

In this era of fake news contrarians tend to, conveniently, ignore that addressing climate change can only occur while social and economic fairness is also pursued.

The other weapon of the contrarian is to exaggerate the emphermal and represent that as typical.

This I have come to categorise as Reverse Cry Wolf Syndrome.

Either the tide is turning or it is about to engulf us all. I’m really weary of it.

But, with others, I intend to keep trying to work to wear down the petulant sulks of those whose indifference, hypocrisy and outright denial, has brought us to where we are now.

Dan Boyle: My Kind Of Town