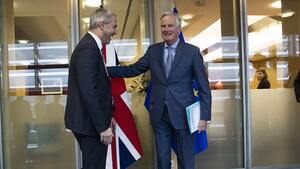 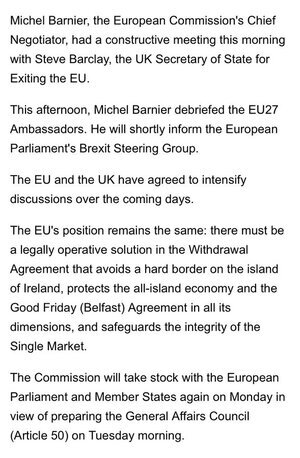 EU has agreed to enter the “tunnel” on new Brexit proposals – so intensifying talks. Big boost for Boris Johnson but we’re still not clear what’s been floated

May be related to whether N Ireland stays in customs union, and fresh idea on securing consent from people of N Ireland…

Mr Barnier urged “patience”, as the EU and UK look to reach a deal ahead of a crucial summit next week.

Brexit: EU27 to move to ‘tunnel’ negotiations on detail of deal – live news (The Guardian) 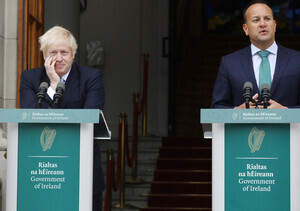 ‘When Leo Varadkar met Johnson in Dublin last month, the Prime Minister was left with the distinct impression that if he was prepared to put a regulatory border in the Irish Sea then Dublin would be prepared to think creatively about other matters. No. 10 offered up this concession, but to no avail.

Even those in Downing Street who are inclined to a more diplomatic approach than the Vote Leave veterans are irritated that the Irish have failed to engage with the UK proposal.

They reckon that they have moved a long way — and,unexpectedly, brought the DUP with them — and that Dublin and the EU just aren’t recognising that.

They believe that because their solution brings with it Unionist consent, it is built to last in a way that the backstop wasn’t; polls suggest that around 80 per cent of Unionists are uncomfortable with the backstop. Yet still the EU says that the proposal doesn’t pass muster.

The Benn Act sends Johnson naked into the conference chamber. If there’s no deal by 19 October, then the government must ask the EU for an extension. However much Downing Street huffs and puffs about this, there isn’t a way round this law. Even if No. 10 finds a loophole, the courts are bound to close it.

As for the hopes that another EU state will veto the extension request: that ain’t going to happen.

The consequences of no deal would be dire for Ireland; and no EU member state is going to inflict that kind of damage on another. The solidarity of the EU27 that London has failed to crack in three years isn’t about to break now…’

‘We Are Prepared For The Worst But Hope For The Best’