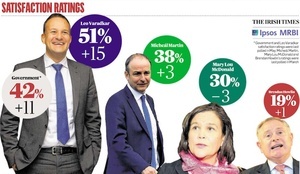 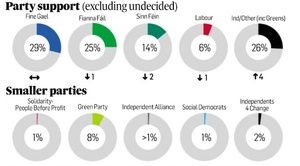 Varadkar’s personal rating has risen a whopping 15 points since May, returning to the very high levels he enjoyed in his first year as Taoiseach.

…Just as some kind of honeymoon period for the Fine Gael leader was to be expected, so too was the inevitable return to earth. The first two phases have now played out. The less predictable question is: what comes next?

Voters are impressed with his management of Brexit, where 60 per cent are satisfied with the Government’s performance, with just over a quarter (26 per cent) expressing dissatisfaction.