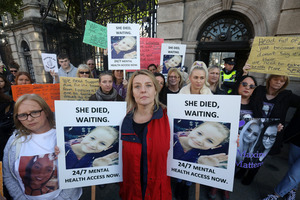 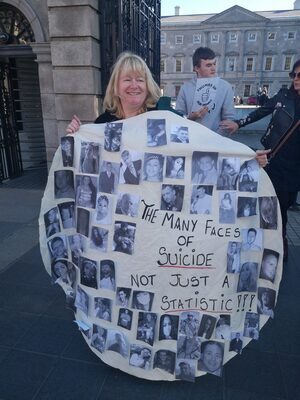 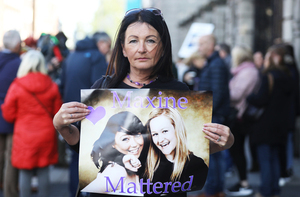 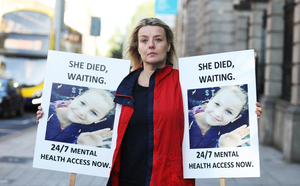 Members and supporters of the Mental Health Warriors demonstrated outside the gates of Leinster House. 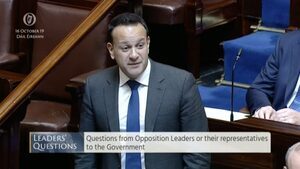 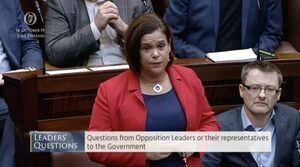 She also recalled the death, by suicide of Grainne Gault’s daughter Elisha on St Patrick’s Day last year, and told him Grainne would be taking part in the protest.

Ms McDonald told Mr Varadkar that, over the past two years, 744 people in Ireland died by suicide.

“The Government’s failure is most evident in the child and adolescent mental health service, CAMHS, which is on its knees.

“It is crumbling while families and communities cry out for help, which the Government is not providing. Staffing shortages have led to CAMHS beds lying empty and children waiting months for mental healthcare.

“Since 2012, the budget for mental health services has increased by 44%.

“I doubt one could find such a large increase in mental health funding in any seven-year period in Irish history.

“The Deputy will be aware that the rate of suicide in Ireland has fallen by about 30% in recent years.

“Of course, any suicide is one too many, but we all welcome the fact that suicide rates in Ireland are dropping. It also reminds us that there is more to do.

“The Minister of State, Deputy Jim Daly, who has responsibility for mental health, informed me last week that the CAMHS waiting list is down 25% and still falling.

“That is a very positive development, on which we need to build. We have also invested in improving psychological services in primary care, by hiring an additional 114 assistant psychologists, for example.”

The Taoiseach added that, last week, a 24-hour mental health helpline was established for the first time.

“People often do not know how to access the 1,000 or so different mental health services out of hours, whether in the evening, at nighttime or on weekends. That helpline, which is based in the National Ambulance Service, is making a real difference.”

Ms McDonald, during her response, said:

“The death of Elisha Gault, the child I mentioned, was not captured in the official statistics.

“She is not officially recorded as a death by suicide. Instead of claiming – I believe erroneously – that deaths by suicide are falling, the Taoiseach would be better served by looking at those real live statistics and understanding that they do not represent the full picture.

“The Taoiseach rattled off figures to me, citing a figure of €40 million. However, only €14 million of that is new money. That is a fact.”

OK, Who Ordered The Pepperoni?

6 thoughts on “Meanwhile, Outside (And Inside) Leinster House”