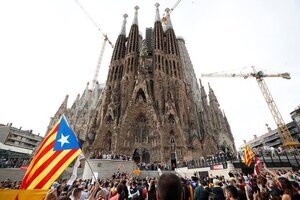 Hundreds of thousands of demonstrators waving pro-independence flags and chanting “freedom for political prisoners” joined marches across Catalonia on Friday, the fifth day of protests against the jailing of nine separatist leaders over a failed bid to break away from Spain in 2017.

Friday’s marchers, ranging from families pushing prams to cyclists wheeling their bicycles, took over a highway lane and other major roads as they walked peacefully towards the Catalan capital, many sporting yellow ribbons – a sign of protest against the jailing of Catalan independence leaders.

Major roads were blocked off across Catalonia and several main streets in Barcelona were closed to traffic in anticipation of the marches, as well as picket lines that had begun springing up, while regional trains and the city’s metro were running on a reduced timetable after pro-independence unions called a strike…

Video Of All Of Ireland’s Goals Against Spain Ever

A Spaniard In The Works

23 thoughts on “Meanwhile, In Barcelona”