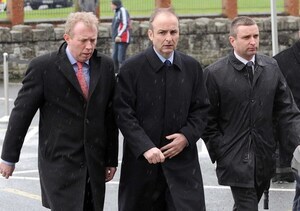 During the Tory leadership election the YouGov polling organisation did a survey of Conservative party members to ascertain the importance of Brexit to them.

It Specifically asked how many of them would continue to back Brexit even if it meant the last of Scotland and/or the last of Northern Ireland. Remember these are paid up members of the British Conservative and Unionist Party, the clue should be in the name.

The results were surprising, though not disheartening when viewed from Dublin or Edinburgh.

Cold comfort for the DUP after a weekend that saw it unable to persuade one single Tory MP to stick by it.   Since Johnson has come to office it seems that he has viewed this polling result less as an indication of the current state of mind within the Tory party and more as a goal for which to aim.

Though – like the few things Johnson has succeeded in doing since becoming Prime Minister – it is better that he thinks he is saving the Union, as he usually manages to deliver the opposite of that which he set out to do.

In his latest Brexit deal, which may or may not be passed this week with an added UK wide customs union or second confirmatory referendum, Johnson has set his face firmly against Scotland with a ferocity and pig-headedness that is all but guaranteed to end in Scotland voting for independence within the next 18 to 24 months.

A Scottish vote for independence and the break up of the “precious union” of England Scotland, Wales and parts of “Northern Ireland will have consequences for all of us on this island – and it is long past time that we started preparing for them.

While these preparations must include a border poll here, it is not the starting point, nor is it near the top of the list.  While Brexit has fatally damaged trust and confidence between Edinburgh and Whitehall, it has broken down trust here in all directions.

It has damaged trust across the three sets of relationships, the three strands, crucial to progress in the North:

1. Within NI Between communities in the North,

2. Between North and South on this island, and

3. East/West, between these two islands.

While it may seem counterintuitive right now to talk about rebuilding relationships in the run up to a border poll which potentially results in reducing some of them, that is precisely what it required as the Good Friday Agreement is built on these three strands of relationships.

The Agreement, about which Boris Johnson knows so little, is hard wired to even work where the polarities are reversed, in the event of the North voting to exit the UK and join with the 26 counties in building a new all island, Ireland.

I had intended to talk at greater length about this issue and will doubtless return to the importance to Ireland of Scottish independence in the near future, however I did want to devote some space here to allow me to comment on the Votegate debacle.

As one who is not shy about kicking Sinn Féin, Fine Gael, Labour or the Greens when they transgress, I cannot just ignore what has happened and pretend that it is not deeply embarrassing to me and others who back Fianna Fáil.

I know Lisa Chambers, Niall Collins and Timmy Dooley well. I have worked with each of them. I helped Lisa while she was Defence spokesperson and worked with Niall when he played a blinder in the Marriage Equality campaign. I have the highest regard for all three.

It is why I can sincerely say that I have no doubt that there was no venality or malice in what any of them did, but it is also why I have to admit that what happened was a disgrace.

It should never have happened and none of the explanations given can excuse such a blasé attitude to the procedures and processes of our parliament.

I commend Micheál Martin for moving on Timmy Dooley and Niall Collins and temporarily taking them off the front bench (at the time of writing) while the matter is investigated, but it should not have taken Fianna Fáil 24 hours to issue a statement on this.

Surely what was clear by midday on Sunday was also clear within hours of the story appearing on the front of the Irish Independent on Saturday morning?

It does matter whether a motion before the Dáil or Seanad passes with a majority of 42, 43, 44 or 45 votes.

The essential cornerstones of our democracy are that decisions are made by the people who show up, they are made in public, and the votes cast fairly are recorded in an open and transparent manner. Every vote matters, every vote counts and they must each be counted fairly and openly.

The fault does not lie with the system of voting, after all there is a massive display board overhead where you can see the votes as they are cast, it lies with the attitude to voting and the impact of voting.

While the “ah sure, what does it matter if it passed by 10 or 11 votes” attitude can have no place in our parliamentary system, it is hard to pontificate on the absolute sanctity of every single vote when so many of them are blissfully ignored by the government.

This is a point which the mouthier Fine Gael TDs might reflect upon the next time they are just as blasé about defending the Taoiseach nonchalantly quashing another Private Members Bill that has been passed by a clear majority in the Dáil or Seanad by way of a misuse of the money message from Cabinet (an issue I raised here before).

The Votegate saga has done damage, not just to Fianna Fáil, but also to how parliamentary business is seen to be done.

My thoughts on how to tackle the former I will share with colleagues in private, but my straightforward idea on how to address the latter, I am willing to set out now.

I would suggest, as an easy to implement interim solution and pending a more detailed report to the Ceann Comhairle, that the Dáil completely abandons electronic voting for the rest of this session – up the next general election, whenever that may be – and returns to holding all votes by way of divisions.

Having all votes taken by TDs walking through the lobbies and being ticked off on lists, may be time consuming, but it could be a small first step in reassuring voters that votes are conducted fairly and that the people who are supposed to be in the Chamber and voting, truly are.

Earlier: Push The Button And Let Me Know

12 thoughts on “Derek Mooney: Of Brexit Votes And Votegate”