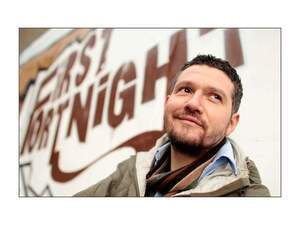 The charity has since become a mental health service provider with the establishment in 2013 of the First Fortnight Centre for Creative Therapies in Dublin.

Every year, looking forward to our next festival means looking back at the work that we’ve done in years gone by. This year brings more cause for reflection than others as a massive part of First Fortnight is no longer at the table.

Earlier this year, our co-founder J.P Swaine decided the time had come for him to say farewell to the charity.

JP has been the driving force of the organisation for more than a decade – sparking ideas, encouraging others, leading by example and always ensuring the charity stayed true to its goal to challenge mental health stigma.

First Fortnight began at JP’s kitchen table and through it all we have been privileged to share space, physical and mental, with someone whose extraordinary efforts have inspired not only those of us who had the opportunity to work with him, but every single person who has ever been influenced by the work of First Fortnight.

With the New Year and FF2020 on the horizon, we hope you’ll join us at the launch of First Fortnight 2020 on November 27th (full details to follow) to show our appreciation and gratitude to JP as we continue the work that he started all those years ago.

JP, there will always be a place for you at the kitchen table!