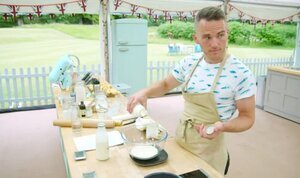 I don’t know if I’ve said this here before, but I wouldn’t be a veggie cake person.

Ok if you were to put a bit of carrot cake in front of me, I’d be polite.  But I wouldn’t make one, clearly that’s the fault of my own palette, and as recently as last weekend there I came across a recipe from Haiti, Sweet Potato Loaf that includes three spotty bananas and maple syrup in the line-out of ingredients; sincere apologies to the Caribbean bakers – but lads that makes no sense to me, it like asking me to stir washing power into my mash.

If I’m being parochial and closed minded here, yeah, I’ll wear that hat. But for now I’m here only to talk about cake.

And we are talking about High End Grand Patisserie so I’ll not be making apologies for stating that David and his beetroot and parsnips and his smug yoga grin should have been sent home.

He might as well have made soup out of his ingredients, and that’s just not playing by the rules of Patisserie Week.

But it’s not his fault nor the Judges’ that I didn’t rate last night’s semi-final since the show for me the moment it dingled into its theme tune was a bit dysfunctional; I’m those ties scratched my nerves as they walked across the green into the tent.

This homage carry-on has become a thing now, and I don’t like it.  Let the viewers follow up with the baker who was sent home, give them a follow, buy their book and leave it at that.

The silliness of it can be grasped easily by any on-looker from the intensity of each bake last night; even from a crumb of sweat you could sense every one of those four semi-finalists was ravenous for the nod, the handshake, the Star Baker, The Win.

None of them were genuinely sad to see Henry the Tie man go. So, stop with the wish he was here’ing. It’s dog eat dog in that tent, so stop letting on it isn’t, its unfair to the great bakers that have come and gone, cried and celebrated there over the last ten years, and its unfair to us the viewer. Ok, rant over.

One thing about the real business of the Bake-Off Semi Final that I want to make sure I mentioned today, was the Signature.  They made it look stressful, fecky and out of reach for the average baker, but they barely had an hour and a half, whereas we’ve got all day and over night in our own kitchens.

Sablee pastry isn’t as fancy as it sounds on the telly nor in Rosie’s recipe; its basically a sweet desert pastry for tartlets so start there.

I think a dome finish can be achieved by any baker’s skill level, and I wouldn’t dream of loading one with the range of combinations Rosie had in hers; mint and raspberry, yuzu, lemon and white chocolate.  But then I’m not putting it in front of the Hollywood, nor am I in their shoes.

Yet Steph has proved time and time again that less is more in the Signatures, (like last week’s onions) and I’m going mad her recipe hasn’t been made available.  But I’m sure we can figure it out.

Start with the tartlet, and here one I made earlier, and off we go with jam, lemon curd mousse maybe, and a bitta’ glaze.  In fairness to our Star Baker last night, Alice’s Chocolate Orange dome tarts are definitely worth a crack.

You might have some interest in the Technical yourselves, but it was of no use last night for Rosie who won but still ends up with Joe Brand on Friday nights Slice.

I tried to enjoy the Showstopper which to be fair ended in a spectacular display when they went before the Judges , and I appreciated learning something new that could be easily attempted at home with the sugar glass; but Alice’s labour pain face was too much – especially when she stood in front of Paul and Pru, it made Cake look painful.

Actually, I’m already cringing about the Final; but as some of us know about labour pain it’s all easily forgotten.

So our Finalists, Steph Blackwell, Alice Fevronia and the veg meh, David Atherton combine to compete in the youngest (average) age Bake Off Final in its ten years.

I’m going to break with Bake’Sheet tradition here, as it’s my second last one anyway, and infuse a few spoilers because I think ye might want to have a pen and paper ready next week.

Signature will be a Chocolate Cake, and the Technical is a Souffle so expect there to be different starting times and one by one Judging, so nerves in the tent will be like dried seaweed and cracking to the touch.

The Showstopper is a Bake Off favourite, an Illusion Cake, but without any tricks, it must created from three elements only; Cake, Biscuits and Bread.  So while Alice was biscuit week Star Baker she’ll miss using her brightly coloured slash glass for dazzle, and this might prove true, David meh; I don’t care.

I’d like to say good luck to all in the final, but actually I mean, good luck to us the watchers; I’ll not cope with Alice’s crampy labour pain face, or  David’s smirky smuggy vegan grins.

10 thoughts on “Wiping The Glaze Off His Cake”