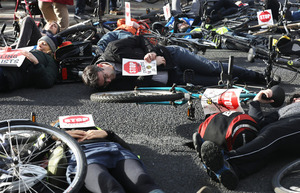 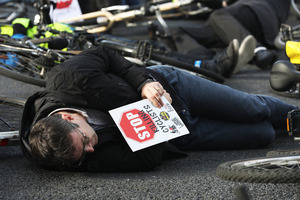 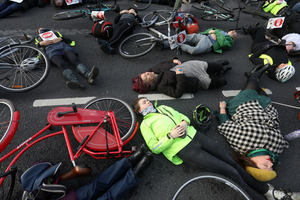 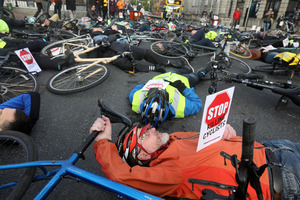 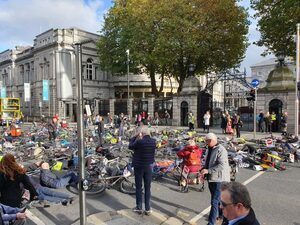 Not too late to join us to demand that the govt #StopKillingCyclists pic.twitter.com/Gqv3trEpYY

Last week in the Shankill area of Paulstown, Kilkenny, a cyclist in his 70s died after he suffered serious injuries following an incident with a parked lorry.

Today’s ‘die-in’ is the second such ‘die-in’ in as many days. 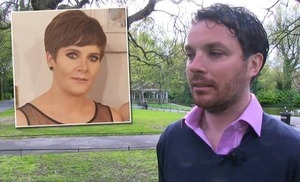 Neil Fox (above) – whose sister Donna (above inset) died when she was hit by a lorry turning left at the junction between Seville Place and Sheriff St Upper in September 2016 – has written a blog post about today’s “die-in”.

“‘Die-Ins’ have a very clear purpose and the fact they horrify is the real reason for them, they bring the harsh reality across in a way nothing else quite can.

“As someone who had to wait days before I could see my sister, one might imagine I’d never need a reality check on the horror.

“But I do, and if I do, how much more others who have thankfully never been directly effected by the tragic brutal violent death of a loved-one in a cycling collision.

“…I call on the Government as ever, to wake up, to do whatever possible to curb such carnage. Carnage, lives lost, lives destroyed. Real people. Not mere statistics.

“…I really hope some good comes of today’s demonstration. It is heartbreaking but perhaps a re-enactment, dramatic as it is, is needed to bring our government to act. Really act.”

Meanwhile, At The Races

23 thoughts on “Die-In Another Day”