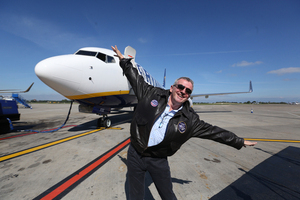 Ryanair has confirmed that some 737NG planes have been taken out of service due to cracks, a problem that has grounded dozens of the jets globally.

In a statement to RTÉ News, Ryanair said Boeing is carrying out repairs on behalf of the airline after an inspection of more than 70 of its oldest aircraft in full compliance with the Airworthiness Directive.

But the carrier dismissed reports [see below] that some of its Boeing 737NGs have been affected by the ‘pickle fork’ issue. Pickle forks are components that attach the wings and the aircraft’s body.

Ryanair confirms some 737 planes being repaired for crack (RTÉ)

At least three Ryanair Boeing 737s have been grounded due to cracks between the wing and fuselage but this was not disclosed to the public, the Guardian can reveal.

The budget Irish airline is the latest to be affected by faults in the “pickle fork” structure, which has sparked an urgent grounding of 50 planes globally since 3 October.

Boeing 737 cracks: Ryanair grounds three planes due to cracking between wing and fuselage (The Guardian)