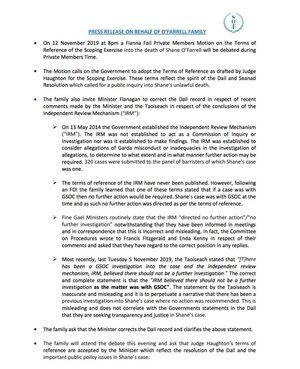 A statement released by the family of the late Shane O’Farrell. 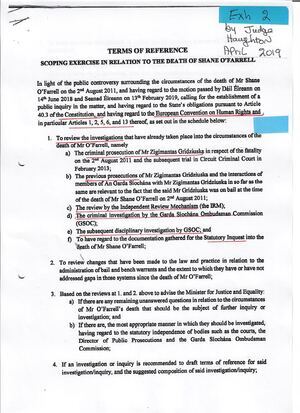 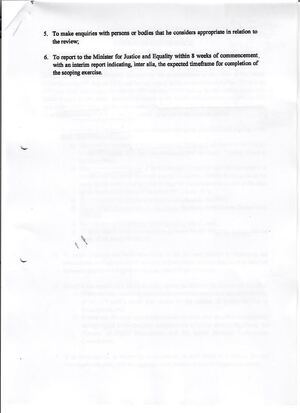 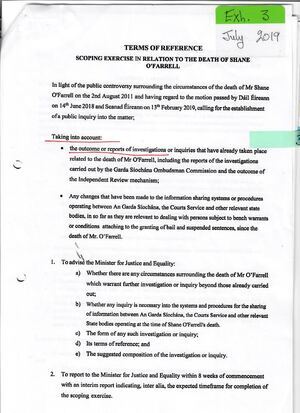 Terms of reference submitted by Judge Gerard Haughton for a scoping exercise into the death of Shane O’Farrell; terms of reference set by the Department of Justice; Lucia and Jim O’Farrell with their daughters outside Garda HQ in Phoenix Park in January

Fianna Fáil is calling on the Government to reverse its decision and permit an inquiry into the death of Monaghan man Shane O’Farrell proceed.

…The party’s Justice spokesman Jim O’Callaghan has said the purpose of his private members’ bill is to pressure the Government to accept the original terms of reference for an inquiry as produced by Judge Haughton,

“The purpose of the motion this evening is very simple. We want to get down there and to approve the terms of reference that were put forward by Judge Houghton in April of this year, we believe they are satisfactory that they will achieve the purpose and spirits of what’s all there and voted for in June of 2018.

“We’re hoping to get support from other parties, and we believe we will,” he said.