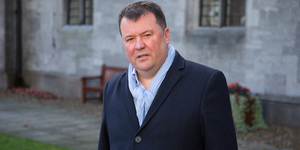 Cumar – A Galway Rhapsody’ examines the influence of Galway city and Connemara on seven artists of varied fields.

In turn the lens focuses on the impact of these artists’ work on the place where they live. The artists featured in the film include: musician/composer Máirtín O’Connor, poet/playwright Rita Ann Higgins, novelist Mike McCormack, Noeline Kavanagh, artistic director of Macnas, singer song-writer, Róisín Seoighe, visual artist, Pádraic Reaney and comedian, Tommy Tiernan.

The film is scored by Galway composer Jake Morgan while Galway Street Club make a guest appearance with their own brand of music.

The film will screen at Regent Street Cinema as part of the Irish Film Festival London on Sunday at 7.30pm. The screening will be proceeded by a drinks reception celebrating Galway 2020, European Capital of Culture.

For Your Consideration: Tardigrade

This Is Not Gentrification