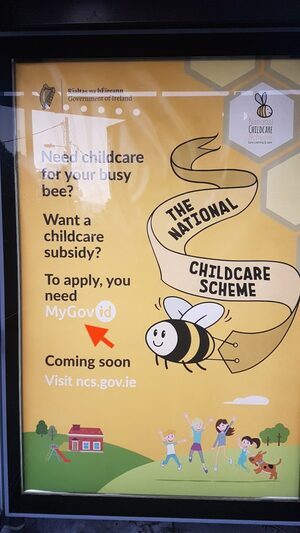 From top: Then Minister for Public Expenditure and Reform, Paschal Donohoe, after he registered for a Public Services Card in 2016; Bus shelter ad for the new National Childcare Payment scheme

The State’s decision to require parents to have a public services card to qualify for new national childcare payments is “illegal” and “highly discriminatory”, the Irish Council for Civil Liberties (ICCL) has warned.

…Elizabeth Farries, privacy expert with ICCL, said the people who could least afford to lose out on the enhanced supports in the national childcare scheme were those “on the breadline”.

“We’ve seen this for a number of years now, that the PSC targets those who can least afford to fight it. Those in receipt of social welfare payments, pensioners, students who need maintenance grants, they’ve all been forced to hand over their personal data in exchange for services to which they are already entitled.”

A languages teacher in rural Ireland broke her ankle but was denied welfare benefit by the Department of Social Protection because she refused to get a public services card (PSC).

The woman, who suffered the injury in September while walking in the countryside, had to undergo surgery. She was housebound after the accident and out of work without income for seven weeks.

Teacher denied access to social welfare after breaking her ankle and refusing to get PSC (Cianan Brennan, Irish Examiner)