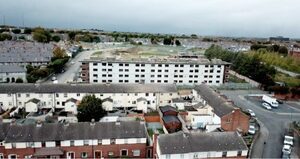 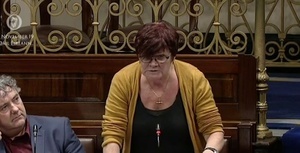 During Leaders’ Questions, Dublin South Central Independent TD Joan Collins raised the controversial deal between Dublin City Council and Bartra for the development of housing at O’Devaney Gardens in Dublin 7.

“Does the Taoiseach agree that the situation with the redevelopment of O’Devaney Gardens, a former council housing estate, is a fiasco?

It was a fiasco from the start and it a fiasco now.

It is an incredible situation given the scale of the housing and homeless emergency we face.

This site, with 14 acres of prime land owned by the State and suitable for up to 800 housing units, has been left derelict for more than ten years.

The original public private partnership, PPP, project collapsed when the developer realised that the €100 million in anticipated profit would not be guaranteed given the collapse in house prices after the 2008 crash.

The PPP model failed because it was based on the premise of massive profits for private developers.

It is this failed model, however, that the Taoiseach’s Government and the Minister for Housing, Planning and Local Government, Deputy Eoghan Murphy, are insisting on imposing not just on the city council but on the community from O’Devaney Gardens still waiting for the redevelopment of the area they want to live in as council tenants.

Make no mistake, the problem here is the Minister’s right-wing, neo-liberal bias against public housing.

The Minister wrote to Dublin City Council in October threatening to withdraw State funding for the project unless councillors voted for a deal with a developer, Bartra, that would give 100% of public land in return for 30% of public housing.

Rather than stand their ground, councillors from Fianna Fáil, the Labour Party, the Green Party and Social Democrats have effectively caved into the Minister’s blackmail and tried to repackage the deal with Bartra as something it is not.”

“Let us be clear what this means.

This is the same deal that for the developer means 14 acres of prime land, close to the city centre and a Luas line, for free.

The State will pay for infrastructure, a saving of €10 million for Bartra, while the absence of development levies will mean another €5 million saved.

If the State came up with the €120 million for the 30% of the developer’s 70%, which is highly unlikely now having listened to the Minister’s comments, the total cost to the State would then be in the region of €250 million.

The sum of €250 million is what council officials estimate it would cost to build 100% public housing on the site, with cheap loans from the European Investment Bank, EIB.

There is something seriously wrong here.

Is it plain stupidity? I do not think so.

Is it corruption? That was certainly a feature of the past, but not today.

To me, that leaves ideological bias and political cowardice.

Meanwhile, 10,000 people, 4,000 of whom are children, are living in homeless accommodation and thousands upon thousands of people are waiting for housing in this country.”

Not For The Likes Of You

19 thoughts on ““There Is Something Seriously Wrong Here””