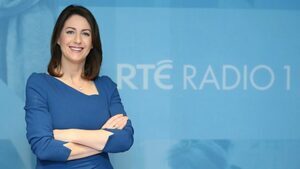 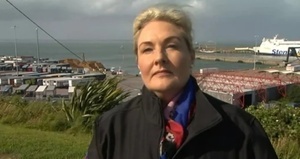 The programme was scheduled to hold a debate with all the Wexford by-election candidates – Fine Gael’s Verona Murphy, Fianna Fáil’s Malcolm Byrne, Green Party’s Karen Dubsky, Labour’s George Lawlor and Aontu’s Jim Codd – ahead of the by-election on November 29.

However, Ms Murphy, who is also the President of the Irish Road Hauliers association and was recently appointed a Diversity Ambassador by the EU Transport Commissioner Violeta Bulc last month, pulled out last night.

It followed controversial comments made by Ms Murphy including the suggestion that asylum seeker children as young as three need to be “deprogrammed” as they may have been manipulated by ISIS.

“Verona Murphy had been confirmed as a guest on our studio panel here tonight, since last Thursday.

“As of this morning, she was still coming on this programme. Her press handler was in contact with our production team – all was in place.

“But, at two minutes to seven o’clock this evening, we received a call to say that Verona Murphy would, in fact, not be appearing.

“And, following that, we got a short statement form Verona:

‘Given the controversy of recent days and my subsequent apology, I’ve decided not to take part in tonight’s Late Debate. My focus for the coming days will be listening to and engaging with the issues that concern all living in Wexford.’

“Now we did attempt to get some clarity on what this might mean for her candidacy.

“We understand that there was a meeting at Fine Gael headquarters this evening which was attended by Verona Murphy.

“We don’t know what was discussed at that meeting but the official line from Fine Gael tonight is that she is still their candidate.

“So there you have it. It is, of course, a disappointing development. If Verona Murphy had joined us agreed, I would have liked to have asked her about those controversial quotes she gave to David Looby.

“I would have liked to have asked her whose idea it was to visit a direct provision centre in Waterford yesterday which she said later gave her a profound understanding of the issues around migration.

“I would have liked to have asked her if after that meeting, she still believes, as she told David Looby, that we need to take in the possibility that Isis have already manipulated children as young as three or four.

“I would also have liked to have asked Verona Murphy if she stands by her comments in that interview, that addiction and bad personal choices lead people to become homeless.

“And I would have liked to have asked her to expand on her view that drink-driving laws have decimated rural Ireland.

“But, unfortunately, Verona Murphy has pulled out of tonight’s debate, so we won’t be getting her response to those or any of the other issues important to the voters of Wexford tonight.”

Earlier yesterday in the Dáil, during Leaders’ Questions…

“Fine Gael’s candidate in the by-election, Verona Murphy, has doubled down on the hateful rhetoric we have heard from her in the media.

“Today in the Wexford People, she is quoted as claiming that addiction and homelessness are the result of bad choices. Not only does she blame the poor for poverty, but she also blames migrants for every other crisis that exists.

“She blames migrants for everything and stated ISIS is infiltrating this country in large numbers, without knowing that the lowest number of migrants and refugees who come to this country come from the Middle East.

“Her statements are absolutely incendiary and are not just made to get attention.

“She is playing the racist card, which has a double impact.

“It deflects from the things I have mentioned, namely, the crises in health, homelessness and mental health services for children, which will go under the radar because the Fine Gael candidate is playing the race card.

“…The Taoiseach described the candidate as an outspoken, independent woman who does not toe the party line. How high does the Taoiseach’s bar go?

“When will he address this issue and deprogramme and deselect this candidate? If he does not do so, the increased use of the race card will be on his shoulders, as the leader of this country.”

During his response, Mr Varadkar said:

“I read the article in the Wexford People and I do not think the Deputy characterised Ms Murphy’s comments on homelessness exactly as they were described.

“In fact, in the article she described her experience of being homeless. I do not know how many people in the House have had that experience, but she has.

“She described how she left home very early, became homeless, fell out with her family and slept on a couch for a period of time before emigrating to the UK.

“She went on to describe how, later in life, she did her leaving certificate, studied at night to do a law degree and built her business. That is the story she told and I do not think that came across in the way the Deputy described it.

“However, when it comes to what Ms Murphy said about migrants, as I said before, and I mean this, what she said was very wrong. Her comments were ill advised, misinformed and absolutely wrong, and do not reflect the position of my party. It is right that she has retracted those comments and apologised for them.”

Ms Smith replied: “I asked a question which the Taoiseach did not answer, namely, how high his bar is when it comes to his candidate playing the race card.

“…I again ask the Taoiseach how high his bar is when it comes to his candidates using racist language. Would he not immediately say that this is not on and that the candidate has been deselected?

“Furthermore, Ms Murphy needs to be deprogrammed, which will take longer than the two weeks which will elapse before the by-election takes place. What Ms Murphy said is utterly shameful…”

“Now she is spouting lies which will scapegoat minorities. Should that escalate, as leader of the country, it will be on the shoulders of the Taoiseach. I ask him to please answer my question. How high is his bar against racism in his party?

Mr Varadkar respond: “I thank the Deputy. I probably know a little bit more about experiencing racism than perhaps Deputy Smith does…”

“Don’t Forget That Sam Maguire Was A Protestant.”

14 thoughts on “Waiting For Verona”