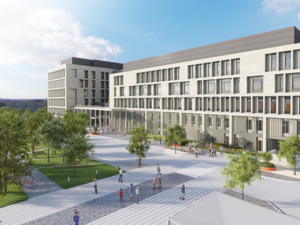 From top: Michael Kelly (left), editor of The Irish Catholic, and Minister for Health Simon Harris; The proposed new National Maternity Hospital; a tweet apparently from the account of Minister Harris this morning which has since been deleted; Response from Social Democrats co-leader Róisín Shortall

Further to Social Democrats co-leader Róisín Shortall’s call on the Government to ‘come clean’ on the position between the Vatican and the State on the new National Maternity hospital, and to halt further spending until ownership is resolved…

An exclusive report in The Irish Catholic states that the Vatican is being lobbied to block the Religious Sisters of Charity from transferring land to the State to facilitate the building of the new National Maternity Hospital.

Michael Kelly reports that Rome-based theologian Fr Kevin O’Reilly has said that the Holy See has an obligation to block the plans.

[Fr Kelly said:] “Thanks to the 36th Amendment of the Constitution, Ireland – to its great shame – now boasts an extremely liberal abortion regime.

“It is in this context that the Religious Sisters of Charity issued their recent statement concerning the ‘imminent’ legal transfer of their shares in St Vincent’s Healthcare Group”.

However, Fr O’Reilly said that “in the wake of any future abortions, no one involved in executing the transfer to date can reasonably turn around and say that this eventuality was unforeseen.

“It is bewildering that those who have facilitated the process to date clearly do not possess any degree of moral foresight.

“One can only hope that the competent officials in the Vatican will act in accord with the Church’s constant teaching and the dictates of right reason by forbidding this unconscionable act,” he said.

Mr Kelly spoke to Bryan Dobson on RTÉ’s Morning Ireland about his article and how the transfer not only needs Vatican approval, it also needs the permission of the Archbishop of Dublin – which has been given by Diarmuid Martin.

However, he said “this isn’t over by a long shot” and later noted that because Diarmuid Martin is due to retire next April, his successor could take a different view to Archbishop Martin.

During the interview, the Health Minister Simon Harris allegedly tweeted Morning Ireland saying “Eh……no nun will be on the board”.

Michael Kelly: “They call it, in Canon Law, the alienation of the property. And that stands whether the land is sold or as in this case it’s being given as a free transfer. The nuns, because it’s over the value of €3.5million, they need permission of ecclesiastical authorities so in the first instance, you’re absolutely correct, that the Archbishop of Dublin.

“And he’s already given his permission and he’s actually recommended to the Vatican that they give approval as well. Now it’s in Rome at the moment and Rome is coming under increased pressure I suppose, lobbying in fact going on, to try to get them to block this proposal.

“Precisely because the new National Maternity Hospital, as [Health Minister] Simon Harris has pointed out will facilitate every procedure that is legal in the State.

“Now since the amendment to the Constitution that obviously now means abortions, terminations of pregnancies, which the Catholic church has pretty clear and consistent opposition to so that’s really where the lobbying is coming from, to try to get the Vatican, the Roman Curia to block this proposal.

“The sisters say it’s imminent, I understand from Rome that they’re not in any hurry to do anything about it. But part of the confusion I suppose is that a lot of the discussions around this has been saying that Vatican permission is not necessary. The law is very clear on it – Canon Law does require Vatican permission. This is church-owned property, it’s not something that the sisters can grant to anyone without the approval of their superiors.”

Dobson: “So where’s this lobbying coming from, who’s involved? Who’s saying that this transfer should be blocked?”

Kelly: “So some of the lobbying that’s going on is coming from moral theologians in Rome for example. One of the people we’re quoting in the newspaper this week is a Professor Kevin O’Reilly, he’s an Irish man but he’s a professor at the Angelicum University in Rome and he’s arguing that this shouldn’t take place, precisely because it would mean that this land would be transferred. He’s saying that that would be directly facilitating abortions to take place.

“He’s basically saying if the State wants to abortions to take place at a new National Maternity Hospital, they should find their own site. I understand that also quite a number of people here, particularly people who’ve been involved on the pro-life side of these debates have been writing to the Vatican ambassador in Dublin, the Papal Nuncio, asking him to make representations to Rome on the issue as well.

Dobson: “Opponents of the move, or at least the new structure that would be in place, for example, Peter Boylan, former Master of the National Maternity Hospital, say that significant problems arise in relation to this new entity would be managed, would be governed, would be put together.

“The Religious Sisters of Charity will still have a presence, he argues, a controlling role in the new board. How will that square with how the Vatican would see this arrangement.”

Kelly: “You see, Simon Harris is trying to give the impression here that this is all going to be very straight, that you known you can have the Religious Sisters of Charity on the board and that will mean that everything that takes place there will comply with current legislation. The difficulty that arises there is, you know, the issue of abortion, is a very, very grave one for the Catholic Church. The Vatican is certainly not going to stand over a situation whereby the sisters are involved in a hospital where abortions are taking place.

“This doesn’t happen in any Catholic hospital in any part of the world.

“So I think there’s a vagueness there, around the structures that probably needs to be clarified but certainly the Vatican will not permit a situation whereby a Catholic institution, even if it’s only Catholic in name, is involved in the provision of the termination of pregnancy.”

Dobson: “We had a statement from Minister Simon Harris. He said that in advance of building works commencing, all outstanding issues would need to be resolved and he’d like to see progress on these as quickly as possible but he could be waiting.”

Kelly: “I think he very well will be waiting because I think the Vatican are not going to do anything in a hurry. Remember the Archbishop of Dublin is due to retire in April with his retirement that creates a whole new page and a successor could think something very, very differently from Diarmaid Martin.”

Yesterday: Waiting For The Vatican

A Hospital For Ants?

56 thoughts on “Nun Shall Pass”