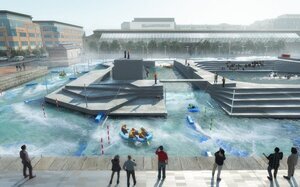 White water rafting, anyone? New images have been released to show what the new white water rafting facility, that Dublin City Council is proposing to build in the IFSC, will look like. The project will reportedly cost €22m and take around 18 months to build.

I live between 3 homeless shelters that did not exist 5 years ago. One for disabled folks. One for families with children.

If you build this but not social housing, you risk people downing you all in it.

Is this a joke? 22million when we NEED social housing so badly? Better Dublin? Better for whom? FGS, we’re at breaking point with increased rents and staggeringly high homeless rates. This is a ridiculous waste of resources.

It’s in the IFSC

*Looks over at O’Devaney debacle*

Initially estimated at €12m, now €22m, by the time the plans are finalised and approved it’ll be at least €50m and you know it. €75m will be spent on this before it opens while the city continues to rot in a mire of homelessness, sky high rents, dangerously bad infrastructure

This was quoted as costing 12 million in August! Still 12 million too much IMO, how did it go up 10M in 3 months? What will the final cost be? This is nonsense. https://t.co/PRq3Q7KnxB

Are you out of your minds, WHAT ABOUT PROVIDING MORE AFFORDABLE HOUSING FOR DUBLIN RESIDENTS and helping fix the housing crisis, or are the proposed new apartment blocks hidden under all that white water?

With Dublin City Council short of money, councillors on the finance committee have agreed to consider a different way to raise cash: civic crowdfunding.

Anything Good On Groupon?

The Lane Of Hate