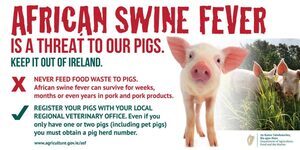 Department of Agriculture, Food And The Marine tweetz:

Always use a secure bin to dispose of waste food, so that it cannot be accessed by farm animals, wild animals or wild birds….

They Talk Of Little Else

5 thoughts on “Kind Of A Pig Deal”