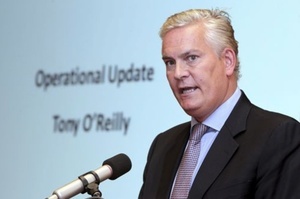 Will Goodbody, of RTÉ, reports:

Providence Resources has today announced that its chief executive Tony O’Reilly has stepped down from the position and has resigned from the board with immediate effect.

Mr O’Reilly has been CEO of the exploration company for more than two decades.

The company said it had started a process to recruit a new CEO to lead Providence in its next phase of development.

A further announcement will be made as soon as this process is completed.

In a statement from chairman of Providence Pat Plunkett, he said:

“Since the foundation of the Company, Tony has been the main driver behind the development of the business and has been passionate in promoting the Company’s role in oil and gas exploration in the Irish offshore sector.

“Over the years, Tony led the Company into partnerships with some of the world’s leading energy companies including ExxonMobil, Eni, Chevron, Repsol, Petronas and Total.

“A major milestone during his tenure at Providence was the successful drilling and testing of Barryroe located in the North Celtic Sea Basin which has provided the Company with a world class development asset which is capable of providing significant shareholder value in the coming years.

“Tony leaves by mutual and amicable agreement and has the great appreciation of the Board for his management of Providence through multiple E&P cycles.

“On behalf of all of Providence’s stakeholders, I would like to thank Tony for his many years of dedication and hard work at Providence and I wish Tony every success in his future endeavours.”

In a statement from Mr O’Reilly, he said:

“After more than two decades with Providence, it is time for me to pursue new opportunities.

“I am extremely proud of all that we have achieved over the years and the key role that our collective team efforts at Providence have played in establishing interest in Ireland’s offshore arena.

“I wish all stakeholders in Providence every success in the years ahead, particularly with the Barryroe Project.”