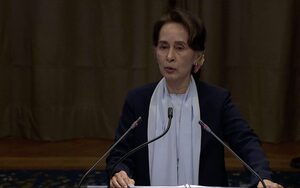 Suu Kyi’s argument: 1) The situation is one of armed conflict 2) It’s not genocide 3) If war crimes were committed, then they will be prosecuted in Myanmar, let us handle accountability at home 4) Forget the Fact Finding Mission, the Commission of Enquiry is credible. #Rohingya

Suu Kyi tells the ICJ judges: “Hate narratives are not confined to hate speech. Language that contributes to extreme polarization contributes to hate narratives.” Here she is referring, in not so many words, to documentation and allegations of genocide by rights groups and others

Myanmar’s Aung San Suu Kyi begins to give evidence at the UN’s International Court of Justice in the Peace Palace, The Hague.

Earlier, supporters of Aung San Suu Kyi gathered outside the court ahead of her arrival for a hearing into allegations that a military campaign by Myanmar against the Rohingya Muslim minority amounted to genocide.

4 thoughts on “Meanwhile, At The Hague”