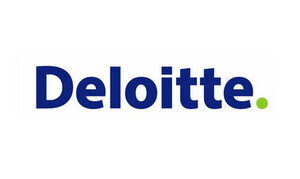 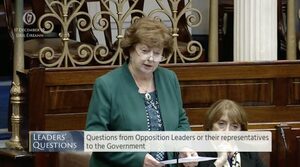 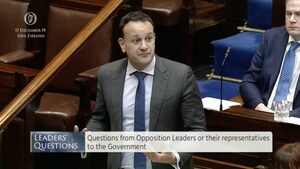 Social Democrats TD Catherine Murphy raised Deloitte and how the company audited the debt-riddled Football Association of Ireland for 23 years.

Ms Murphy said the whole idea of having an external auditor is “that you have independent eyes on your accounts”.

But, she asked Taoiseach Leo Varadkar, “can that really be the case after 23 years of doing the same job for the same organisation?”

She went on to say:

“Financial information which was published recently during the unfolding of the FAI saga showed some startling adjustments to the FAI accounts for previous year.

“In 2017, a profit in the accounts of €2.8million was adjusted to the point that it ended up being a loss of €2.9million in their accounts.

“This is in addition to the fact that the Revenue audit in 2019 revealed an underpayment of taxes and, together with interest and penalties, led to additional liability of €2.3million.

“It begs the question: Would the FAI have managed to secure the tax clearance certificate they needed to access Government grants?

“Taoiseach, you, yourself, were a Sports Minister, and you know that Government grants are paid on foot of a tax clearance certificate in addition to audited accounts but should we now be looking at a system whereby organisations are required to show evidence of audit rotation with in-built time limits for each audit period before a rotation is required. Good governance requires such a system.

“The UK, for example, have introduced a system of grading their audit firms which is also used to ensure rotation. They plan to publish the grades and past performance of the large audit companies and they’ve also introduced more powerful audit oversight.”

“…Taoiseach, my questions are: Do you accept that there is an issue with the same external audit firm, having an audit contract with the same organisation for 23 years or indeed anything near it?

“The EU Statutory Audit Regulations in 2016 are supposed to introduce that but I don’t understand why that hasn’t happened and would you support making such a rotation system a pre-requisite for Government grant funding in addition to tax clearance certificates?”

“Thanks deputy, I don’t want to cast aspersions on any particular audit firm, nor on the many thousands of very good people who work in that particular firm. But I do think the deputy asks good question and makes a very good point.

“And it is a principle of good corporate governance, that organisations shouldn’t be audited by the same people for ever and ever and ever again. So I think that’s something, certainly, that Sport Ireland, and other public bodies should examine as to whether it is made a condition of Government grant aid – that auditors are rotated after a period of time.

“And the same applies to board members as well. We often see a situation in a lot of organisations that we fund, whether its charities, whether its sporting bodies, whether its local task force and so on, where you have the same people on the board for 10, 20, you know, 25 years and that’s not good corporate governance either.

“In terms of the independent audit that’s been done, that was provided to Sport Ireland to the ministers, and is now being passed on to An Garda Síochána, and the Director of Corporate Enforcement is also being notified. The purpose of the audit was to get a clearer picture of the financial and governance issues within the FAI and to chart a course for the association to deal with the serious failings in order to restore confidence and public funding to football in Ireland.

“And that would have maybe changed the auditors and had  a fresh look at a much earlier stage?”

Varadkar: “Deputy I honestly don’t know why that doesn’t apply in this case but I will check it out and provide you with a more detailed reply. It may well be, and I’m only guessing here, that that directive applies to bodies that are majority, or majorly publicly funded, whereas this is abode that received only a small proportion of its funding from the Government. But that’s just my guess, that’s often the way European directives work.

“They apply to largely funded or majority funded bodies, not ones that receive a proportion of their funding from the State but, like I said, I’ll check out on that. And I will ask the Minister for Public Expenditure to examine the wider issue – if public money is going to a third party, through to a voluntary body,  to charity, to an NGO, surely it is appropriate that they are properly audited and they rotate their auditors and a bit like the FAI, appropriate that they should rotate their leadership as well, their chairman, their board members, and not have the same people in charge for 10, 20, 30 years which is just bad corporate governance practice, I think we’ll all agree.” 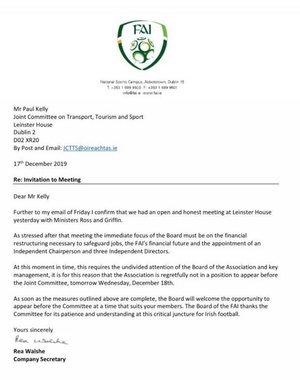 The FAI has declined to attend a meeting of the Oireachtas sports committee tomorrow which was due to discuss the ongoing financial issues at the organisation.

It’s All Kicking Off