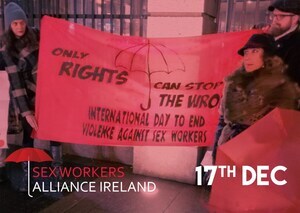 To mark International Day to End Violence Against Sex Workers…

Together we will honour those who have suffered violence and lost their lives due to the dehumanising stigma and marginalisation created by criminal laws.

This year the extent to which our laws both actively harm sex workers and fail to protect us have come into sharp focus. Two workers have been prosecuted and sentenced to jail for the crime of working together for safety. One of these workers is pregnant.

We now know that violent crime against sex workers has increased by 92% since the law came into effect in 2017. Less than 1% of sex workers would report crime against them to the police. Recent spates of attacks and robberies on sex workers show that the law is failing to protect us.

Every sex worker we speak to wants to work with another worker for safety. Our so-called brothel-keeping laws prevent us from keeping ourselves safe.

This is the final IDEVASW before our law is reviewed in 2020. We must be listened to as the experts in living and working under this law.

‘The Deadliest Year For Cyclists In Over A Decade’

Put THIS In Your Diary