While elections can throw up surprises there is one thing we can be fairly certain of: either Fine Gael or Fianna Fail will lead the next government.

Will they combine, repeating the confidence and supply experience (with roles potentially reversed) or enter into an ideologically-compatible grand coalition? Or will they win the support of other, smaller parties and rule separate from each other?

Whatever the final outcome, we know the answer because the only question is – will Fianna Fáil or Fine Gael lead the next government. It’s a two-way race. In this construction, progressive parties are confined to a supporting role.

However, one can construct the electoral landscape in a different way, at least at a categorical level. There are four broad progressive currents:

In addition, there are independents loosely associated within Independents4Change (I4C) as well as other unaffiliated independents.

Together, these four currents constitute a ‘progressive bloc’ – parties that have more in common with each other than they do with either the conservative parties; on a policy level, at least. If this is the case, then we can see Irish politics as – or evolving into – a three-way contest.

Let’s take the European and local elections as an example. The results were not considered good for progressives. Sinn Féin and the radical parties suffered considerable losses, Labour treaded low-tide water while the Social Democrats failed to make significant inroads.

Only the Greens managed to make significant gains. Yet, despite this, progressives as a bloc competed with the two larger political blocs. 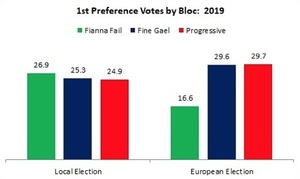 As a bloc, the votes for progressive parties were approximately equivalent to what Fine Gael or Fianna Fáil received. It should be noted that the above does not include ‘independents’; in particular, the I4C candidates. Therefore, support for progressive candidates in the European election is understated.

It would be convenient if the public debate understood that the next election was a three-way competition between these competing blocs. Unfortunately, this is a categorical construction, not a political one.

The different elements that make up the progressive bloc are not cohesive. They do not have a common purpose or recognise a common destiny with each other. Progressives are not conscious of constituting a bloc.

The progressive bloc may exist only as a potential but this potential has some concrete validity.

First, there is considerable agreement on policies and principles between the different parties that make up the progressive spectrum – housing, labour rights, public services, low-pay and poverty.

They are closer to each other than they are to either conservative party. This cohesiveness is underlined by voting patterns in the current Dail where progressives tend to support each other.

AAA/PbP voters identified themselves as the most ‘left-wing’, followed by Sinn Fein. The Greens, Labour and the Social Democrats were grouped closely together as left-of-centre. 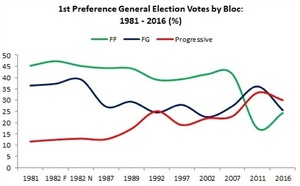 In the 1980s Ireland was described as having a two-and-a-half party system: Fianna Fáil, Fine Gael and Labour with the latter (even in combination with the Workers’ Party) trailing the larger parties by a substantial margin. 35 years later, support for progressive parties has nearly trebled, with all three blocs now receiving nearly equal support.

Policy compatibility, voter identification, transfer patterns and historical trends: the tragedy for progressives is that they collectively have not connected these dots (even though voters may have started to), and are not yet capable of constituting an alternative to the conservative blocs.

There are legitimate concerns that parties will tack one way prior to an election and tack a completely different way when the results are in. However, this is not something confined to progressive parties (Fianna Fail didn’t campaign in the last election on the basis of supporting a Fine Gael minority government).

What is important is not to let the past dictate or circumscribe our ability to create new and better alliances, or pursue strategies that can achieve concrete gains for progressive parties and their supporters.

Some have suggested that the fundamental starting point of a progressive alliance is the rejection of any post-election accommodation with either of the conservative parties. However, the logical conclusion of this position is to radically shrink the progressive bloc to almost nothing; in effect, to eliminate the it altogether.

Progressive parties in other countries have refused to allow past actions to limit future relationships. If Podemos had rejected any contact with the PSOE (who implemented painful austerity measures), then Spain would not be on the verge of a progressive government.

If the Left Bloc and Communists / Greens had, similarly, rejected the Socialists (who also implemented austerity), then Portugal would not have benefited from one of the most progressive governments in Europe.

With voters already moving over the long term to a more progressive position, reinforcing that in transfer patterns, it is imperative that progressive parties vindicate the emerging preferences of their support base. In the next post I will propose a way of doing that as we enter into election 2020. 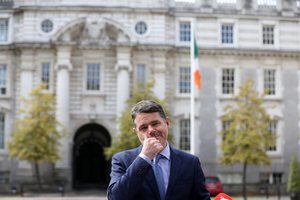 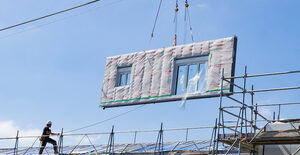